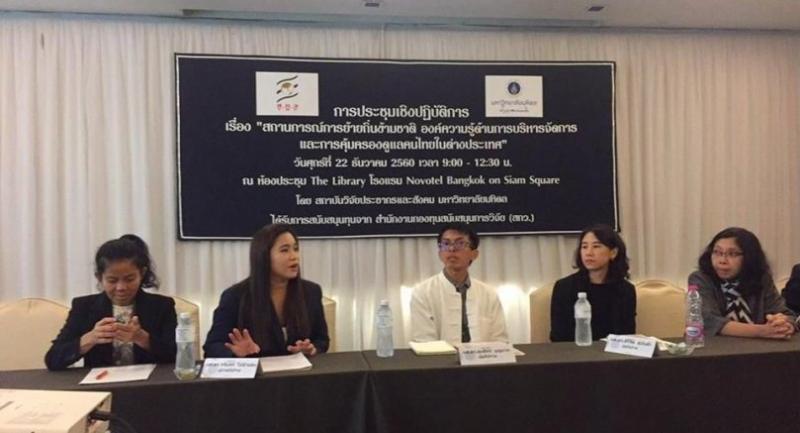 Academics seek policy that would prevent trafficking and oppression

ACADEMICS expressed concern over an increasing trend of Thais seeking illegal ways to work abroad, which made them vulnerable to becoming victims of human trafficking and exploitation by their employer.
They urged the government to implement concrete measures to protect and help Thai workers in other countries.

The Thailand Research Fund yesterday hosted a seminar on transboundary migration and protection of Thai people overseas. The seminar heard that many Thai people are seeking easier but illegal ways to work in other countries, mostly South Korea, Taiwan, and Malaysia, and in the process are putting themselves at risk. While the earnings of Thai migrant workers can make a substantial contribution to the local economy, the families of these workers often have large debts because of the costs incurred in getting the overseas opportunity.
Kritaya Archavanitkul, a professor at Mahidol University’s Institute for Population and Social Research, said that migration and transboundary labour movement were a longstanding and understandable phenomenon of human society, as people travel to seek better opportunities. Kritaya said that working abroad can bring in higher income than in Thailand and it is the right of people to reside and work in another country. However, as working overseas is becoming increasingly popular among Thai people, human traffickers are taking advantage of those working abroad. “The problems of deception, tricking people to work as forced labour or in the sex industry are more prominent. Every year, an increasing number of people are becoming victims of such crimes, while there are still no concrete measures to protect or support Thai workers in other countries,” she said.
“We need more research into the labour movement and to have an official policy to oversee the export of Thai labour, especially when Thailand is part of the AEC [Asean Economic Community] which encourages free movement of labour.”
Samarn Laodumrongchai, a senior researcher at Chulalongkorn University’s Institute of Asian Studies, said that his studies into Thai labour communities in South Korea and Taiwan, found that many Thai people prefer to seek easier, but illegal, ways to work in those countries. That makes them easy targets for traffickers, and vulnerable to being taken advantage of by bad employers. Samarn said the incentive of earning higher income than working domestically has led many Thais to seek employment in South Korea.
Thailand has a state-to-state employment permit system with South Korea that provides a legal path for Thai labour to work there. And South Korea has a very tough approach to discourage illegal immigration. Still, many people still choose to unlawfully enter and work in the country via illegal agencies.
“The illegal workers in South Korea are facing many problems,” said Samarn. “For instance, they are not protected by the laws, most employers take their documents away and do not provide them proper welfare and salary. Many people are also becoming victims of human trafficking and are forced to work in the sex industry.”