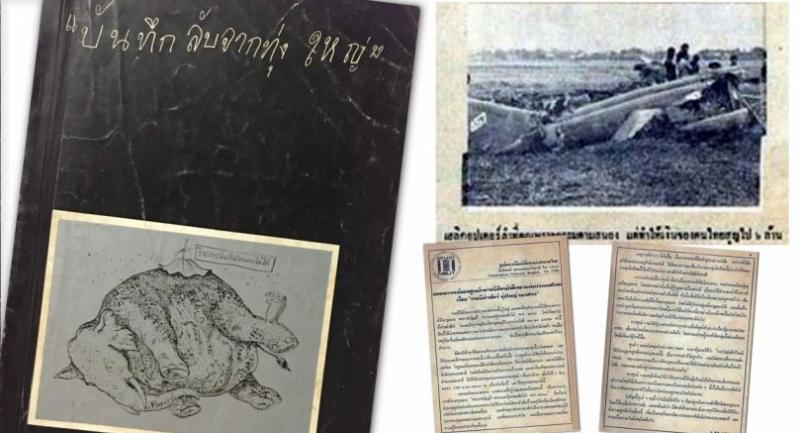 MISHANDLING OF AFTERMATH AFTER A HELICOPTER CRASH RESONATES IN CURRENT CASE

THE HIGH-PROFILE arrest of Italian-Thai president Premchai Karnasuta is not the first time that influential figures with connections to the government have been caught red-handed poaching animals in a wildlife sanctuary.
As documented by Chartchai Mooksong, a history lecturer at Srinakharinwirot University, in an article published by the King Prajadhipok’s Institute, a group of military officers were caught when a Bell helicopter crashed in Bang Len district of Nakhon Pathom in 1973.

After the crash, responders found a large quantity of gaur meat and several rifles inside the helicopter, creating a scandal that shook the government and eventually led to mass protests contributing to the landmark 1973 massacre.
On April 29 that year, the helicopter crashed in Bang Len, killing six people on board and seriously injuring four other passengers, who were later found to be military and police officers. Their possession of the meat and the presence of the rifles caused widespread concern.

Several newspapers reported the news and published a photo of the helicopter taking off in the forest before the crash.
A group of university students from the natural resources and environmental clubs of Kasetsart, Mahidol, Chulalongkorn and Thammasat universities had previously gone to Thung Yai Naresuan Wildlife Sanctuary to conduct conservation activities and later related a similar story about poaching activity in the area.

The students reportedly learned that about 50 military and police officers, accompanied by other people, went to the forest in two helicopters to poach wildlife, leading to the crash of one of the aircraft.
That led to many people believing that the crashed helicopter had been used by poachers in Thung Yai.
Government representatives, led by the late Field Marshal Thanom Kittikachorn, who was then prime minister, gave an interview in which they said the crashed helicopter was on a top-secret mission to protect a top Burmese official who was visiting the border in Kanchanaburi province. The gaur meat might have belonged to somebody else who had asked the helicopter crew to transport it, according to the government.
The interview prompted heavy public criticism of apparent government protection for wrongdoers. One of the accused was found to be the son of a senior military officer who was close to General Prapat Charusathian, and several others were government cronies.
The newspaper Siam Rath published a column that was strongly critical of the government interview, and the late noted political cartoonist Prayoon Chanyawong drew a prominent sketch mocking the incident, with a gaur lying dead under the Thai flag.
The government later reportedly interfered with the media, requesting that newspapers not report about the incident, resulting in a journalists’ organisation issuing a statement in protest.
In early May, the Student Centre of Thailand held a meeting to discuss the incident after members learned about the story from the group of students from the natural resources and environment clubs, who had photographic evidence of poaching in the area.
Participants at the meeting decided to issue a statement advancing eight demands of the government, including the disclosure of the facts and punishment of wrongdoers without favour. Their activity grew, with a second forum discussing the incident in heated terms and on May 19 the Justice Ministry invited five students who claimed to have witnessed the incident to give testimony to a committee set up to investigate the case.
The students later produced one of the most influential journals about conservation, called “The Secret Note from Thung Yai”, documenting the ecological value of the area as well as the incident. They also mocked the government in the journal, noting the extension of the government’s term following the ongoing disturbance over the Thungyai incident was the endorsement of the “guars’ forum”.

However, the government’s investigative committee, chaired by the justice minister, concluded that the crashed helicopter was on a secret mission. Individuals camping in Thung Yai were found to have been poaching wildlife, but the government did not give any details to the public.
The case was later sent to court and nine of the accused were released, while only one local poacher was punished.
By then, the students’ journal was in huge demand, with up to 100,000 copies reprinted.
Ramkhamhaeng University students later produced another journal reusing some of the same mocking language from the “Secret Note”. After the university rector expelled nine students, it led to protests led by the Student Centre of Thailand. The students, who made Democracy Monument their base, succeeded in forcing the rector to resign and the nine Ramkhamhaeng students reinstated.
They later increased their protests to call for a return to democracy and for a new charter within six months. Those demands led to the start of mass protests against the military government by university students.
The protests were suppressed on October 14, with scores of killed, followed by a great number of students fleeing to the forest to join communist groups.