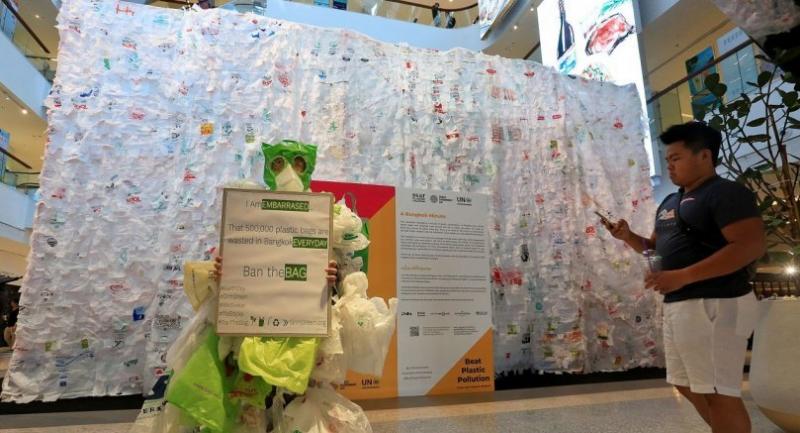 Central Group, United Nations Environment Programme (UNEP), and other private and public associate partners displayed a sculpture that was made of plastic bags at Central World.

EVERY MINISTRY in Thailand has agreed to curb its use of plastic bags and foam packaging as part of the government’s pledge yesterday on World Environment Day.

Falling annually on June 5, the day carried the theme of “Beat Plastic Pollution” this year.

“All government agencies under the 20 ministries will set examples for others to follow. They will reduce their use of plastic bags and foam containers,” Natural Resources and Environment Minister General Surasak Karnjanarat said yesterday. He said ministries would pursue tangible results so as to encourage all other sectors to halt their unnecessary use of plastic.

The move follows Prime Minister General Prayut Chan-o-cha’s April 17 order for the ministries of the Interior, and Natural Resources and Environment to campaign for reduced use of plastic. Thailand has generated about two million tonnes of plastic waste per year over the past decade. Of that amount, just half a tonne annually has been reused or recycled.

“Most of the plastic waste is discarded bags, which will take about a century to decompose,” Surasak said, adding that both the environment and the economy were being damaged as a result.

He also noted that Thailand had been ranked the world’s 6th biggest contributor of plastic pollution to oceans among 192 countries.

In an effort to tackle the problem for the next five years, the Plastic Industry Club, the Federation of Thai Industries, the Thailand Business Council for Sustainable Development, and the Thailand Environment Institute Foundation yesterday launched the “Public Private Partnership for Sustainable Plastic and Waste Management”.

Its objective is to halve the amount of ocean waste Thailand produces by 2027.

Under the project, some 20 organisations from the public, private, and civil sectors are supporting the implementation of sustainable plastic and waste management via the Circular Economy principle, where resources are kept in use for as long as possible. To do this, it will: promote the recycling business, support entrepreneurs to develop innovation and technology for sustainable plastic management using the “3Rs” (Reduce, Reuse, Recycle) principle, educate consumers about waste management and disposal, encourage behavioural changes, pilot a clean city model in Bangkok’s Khlong Toei and in Rayong province, and develop a Thailand Plastic Material Flow Database to measure the |project’s success by international standards.

Relevant parties signed a memorandum of understanding on the project yesterday.

Supant Mongkolsuthree, Federation of Thai Industries president, said the project was an important step for sustainable plastic and waste management in Thailand, since it was the first time that the |public, private and civil sectors had partnered to declare their commitment with support from 177 companies in the industry sector.

“The goal is to achieve tangible results in plastic waste management along the supply chain,” said Supant.