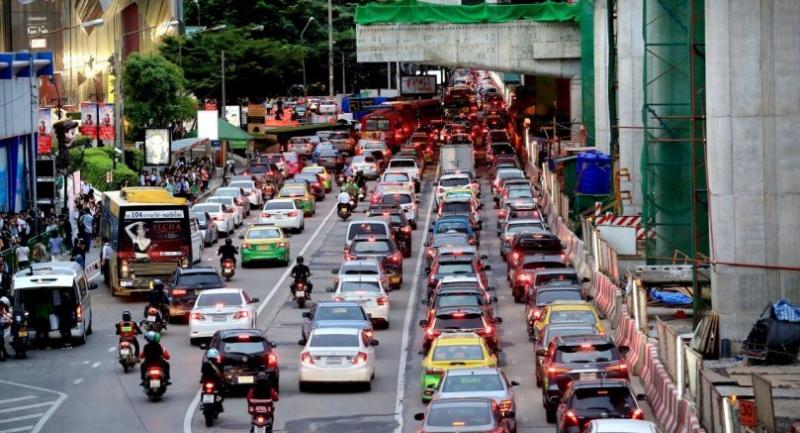 Traffic at Bangkok’s Lat Phrao intersection where a major Skytrain line is being constructed is set to worsen as another four mass transit lines are about to be built.

Bangkok motorists who already struggle with the city’s chocked roads face even more congestion and frustration.

PARTS OF Bangkok are facing years of gridlock as major projects – to build five additional major lines of Skytrain and subway simultaneously – are set to throw the city’s already logjammed roads into further chaos.

Three of the lines are due for completion in about three years while the other two will take up to five years. The huge mass-transit undertaking – covering a total of 103 kilometres – will undoubtedly impede the city’s crawling traffic flow, especially during morning and evening rush hours, as one or two lanes of nearly 10 major roads will be closed during the construction period.

To help mitigate the impending traffic nightmare, authorities are preparing a number of options for motorists to avoid the construction areas.

At present, 65 per cent of the city’s residents use private vehicles to get to work and return home, while only 35 per cent use the city’s skytrains, subways, buses, taxis and other modes of public transport.

Chaiwat Thongkamkoon, director-general of the Transport and Traffic Policy Planning Office, told The Nation that motorists who live on or near the affected areas should leave their cars at home and take shuttle bus services to the nearest Airport Link, BTS and MRT stations.

The Bangkok Metropolitan Administration, which runs the city’s bus services, is working on a number of special shuttle bus routes for motorists who usually drive to work into the city from the suburbs.

Min Buri, a major Bangkok suburb, is one area where shuttle bus services will be available for commuters to reach Airport Link, BTS skytrain and MRT stations to get into the city, bypassing construction sites on the busy Ramkhamhaeng and Phra Ram 9 roads.

Average speeds are measured during rush hours on the city’s Ratchadaphisek inner-ring roads. Over the next three to four years, traffic across the city is likely to move slower from the impact of the widespread construction work to expand the city’s skytrain and subway network from the current 109km to a total of 212km.

Given the city’s population and the number of vehicles on the road, Bangkok already has limited road capacity as the city’s road surface currently accounts for just 9 per cent of the city’s total urban area, compared to 25 per cent for Tokyo and 30 per cent for New York City.

Statistics show that about 1,000 new vehicles are registered and added to the traffic on a daily basis.

New roads are difficult to build and expensive due to the lack of space and high cost of city land expropriation. The government has expedited the construction of skytrain and subway projects to boost the city’s mass transit capacity in the hope of easing the demand for private vehicles.

During the construction period, Chaiwat also advised motorists to consider using alternative routes, such as the outlying motorway and expressway routes to bypass building sites. Another option is to use the commuter boat service on Khlong Saen Saeb, the city’s major canal, which runs from Min Buri in the suburb to Pratunam in the inner-city area. There are a total of 28 piers in residential and commercial areas along Khlong Saen Saeb.

The good news for all Bangkok residents is that the city is on its way to having one of the world’s largest skytrain and subway networks.

Chaiwat said the next stage of expansion is already planned to more than double the combined 212km network to a total of 464km. This will turn the Bangkok system into one of the world’s top five networks.

On average, a total of 2.65 million commuters use public transportation each day. It is hoped that the ratio of people using public transport will jump to 50 per cent of the population in coming decades, up from the present 35 per cent.