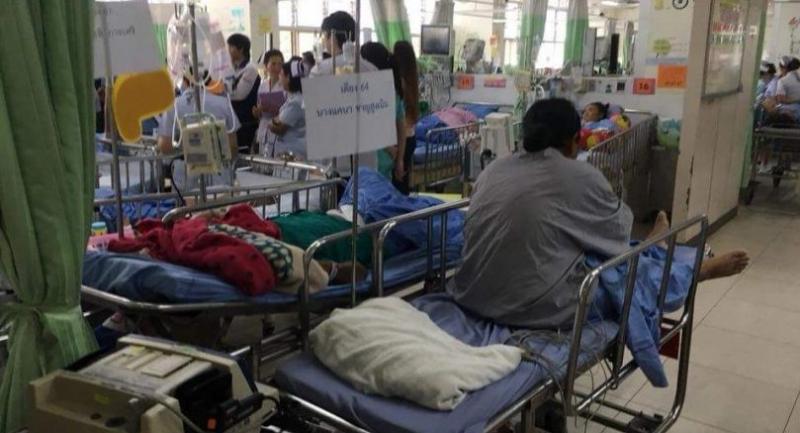 Sustarum Thammaboosadee, a lecturer at Thammasat University’s Interdisciplinary Studies College, yesterday also called for the government to be sincere in allocating funds for the universal healthcare system.

He also pointed out that getting poor patients to be partly responsible for healthcare cost was not fair. Of the 56 countries surveyed, Thailand rose to 27, up from 41 last year – the biggest annual improvement by any country.

The country’s per-capita spending on healthcare dropped to 40 per cent to US$219 (Bt7,086), while life expectancy rose to 75.1 years, up from 74.6 last year. Bloomberg’s health-efficiency index takes into account total expenditure on health, including preventive and curative health services, family planning, nutrition activities and emergency aid. Out of some 200 economies across the world, the index only ranks countries with an average lifespan of at least 70 years, per capita income exceeding $5,000 (Bt162,000) a year and a minimum population of 5 million.

Prayut noted that the WHO had recently named Thailand as a model and source of learning about universal healthcare, the government spokesman said. “WHO views our system as sustainable because public participation is strongly encouraged,” Sansern said yesterday. The Kingdom’s healthcare system has many strengths such as low cost, good service, many standard hospitals and strong government support, the spokesman added.

However, Nimit said more has to be done in terms of public health such as fairer budget allocation for people in the bureaucratic system and ordinary patients under the universal healthcare system.

The activist said the $219 healthcare cost cited in the Bloomberg index was obviously an average of the state budget allocated to Thailand’s different healthcare systems.

He pointed out that Bt3,426 was set aside per patient in the national universal healthcare system each year, compared to about Bt14,000 per person allocated in the bureaucratic welfare system. He said the government should also help lower the cost of medicines by encouraging the use of and improving the quality of generic drugs that can be manufactured locally.

The government should also boost the potential of small, local state-run health centres, so they can help large hospitals deal with patients, he said.

Thailand fared better than many developed countries in the index, with the Netherlands ranking one place below the Kingdom at 28, United Kingdom ranking 35th, Denmark 41st, Germany 45th and the US 54th.