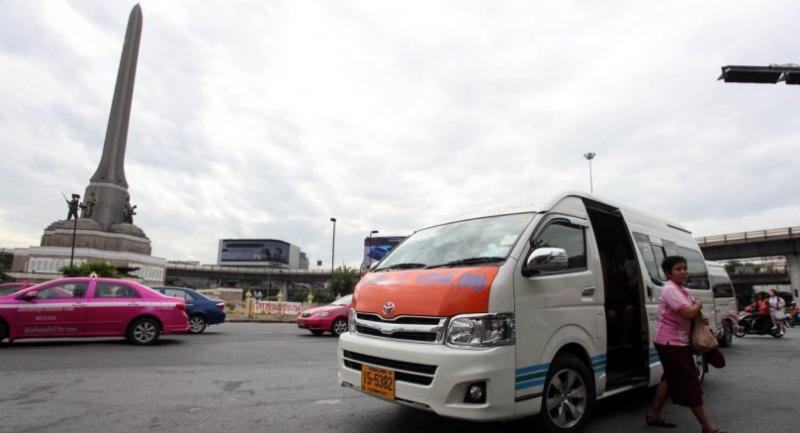 ABOUT 1,000 public-transport vans will be removed from Bangkok’s streets on October 1, as authorities stand firm by their 10-year age limit on the vehicles. They also insist passengers will not be affected.

The Land Transport Department (LTD) has already decided not to extend the licences of 954 vans which expire this year, despite the operators’ threat to go on strike.

Operators petitioned Prime Minister Prayut Chan-o-cha yesterday, asking him to consider extending the working life of vans from 10 to 15 years if the vehicles were still in good condition.

They also threatened to withdraw some vans from October 1 if their proposal falls on deaf ears. “I don’t want to see passengers suffer from this. I want the government and the Transport Ministry to consider the request,” Srisuwan Janya, secretary-general of the Association for the Protection of the Thai Constitution, said.

However, the LTD and relevant authorities insist old vans must be taken out of service to ensure public safety.

Colonel Sombat Thanyawan, deputy commander of King’s Guard’s Second Cavalry Division, told a press conference at the Department of Land Transport yesterday that vans more than 10 years old must not be allowed to run on Bangkok streets because they are unsafe, pollute the air and are not insured, which leaves passengers at risk. The LTD also says it would ensure that passengers are not affected by the operators’ threatened withdrawal of vans because it would provide buses from the Transport Company and Bangkok Mass Transit Authority (BMTA) if necessary.

BMTA has already agreed to prepare buses for routes that 260 to-be-expired vans from the Victory Monument area are now operating.

“We would make sure that there are enough buses, especially in the morning and evening rush-hours,” said LTD deputy director-general Cherdchai Sanunsrisakorn. There are currently about 5,000 vans operating on 170 routes within Bangkok and many connect the capital with nearby provinces such as Nonthaburi, Pathum Thani and Samut Prakan.

Many people will be affected by the removal of vans, especially those travelling from/to Min Buri district, Rangsit and Victory Monument, said Cherdchai.

He said that of the 954 vans expiring this year, 260 operated 11 different routes from Victory Monument, 191 vans (11 routes) from Min Buri, 28 vans from Rangsit and one from Chatuchak.

Cherdchai also said the Land Transport Department planned to stop more vans from registering as public vehicles and encouraged van operators to change to minibuses, which were safer for passengers. The van operators would be offered low-interest loans as an incentive to make the switch. The department expected that there would be no passenger vans left on the street by 2028, he said.

Operators explained that they were reluctant to buy new vans to replace old vehicles because several MRT/Skytrain lines were now being developed in Bangkok and adjacent provinces. The expanding train networks made the outlook uncertain for van services, they said.