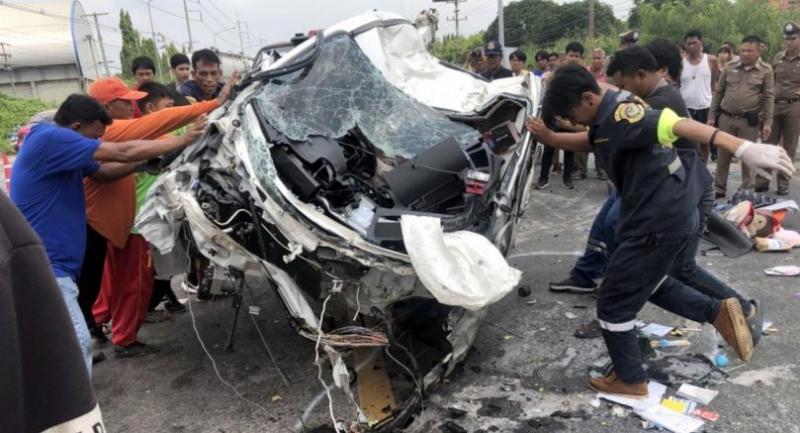 THAILAND has seen fewer road casualties this year but remains the world’s ninth-most dangerous nation when road accidents are in the picture, according to a report compiled by the World Health Organisation (WHO).

Every day road accidents have claimed an average of 60 lives in Thailand, the 2018 Global Status Report on Road Safety shows. No Asean nation has a higher road fatality rate.
“Of those perishing in Thai road accidents, 74 per cent are motorcycle or tricycle users,” Daniel Kertesz, WHO representative to Thailand, said yesterday.
He also lamented that most victims were between 15 and 29 years old – so young to face such an untimely death, especially considering that road accidents are preventable.
According to statistics from Thai authorities, drunk driving, speeding and failure to wear crash helmets are among the common causes of accidents and related deaths.

Ninth worst in the world
In the latest report by WHO, Thailand ranks ninth among 175 nations in terms of road fatalities – down from second in the 2015 report. The 2018 report says road accidents killed 22,491 people in Thailand – putting the road traffic fatality rate at 32.7 per 100,000 people.
This improves on the 2015 rate of 36.2 rate, or 24,237 recorded deaths.
Road Safety Centre manager Dr Thanapong Jinvong believes the better ranking reflected public concern that led to actions that put Thailand on a good track towards the goal of curbing road accidents.
“People recognise that road accidents pose big problems and demand urgent solutions from the government,” he said.
Dr Wittaya Chartbunchachai heads the centre for trauma and critical care, a collaboration between the WHO and Khon Kaen University.
Though noting the improved ranking, he says the country needs to take notice of Thailand’s third place in world rankings when only motorcycle-related deaths are counted.
“And if we remove countries with fewer than 500,000 residents, Thailand is No 1,” he said. The number of motorcycles in Thailand has surpassed 20 million.”
Kertesz wants to see the government, motorcycle manufacturers, road builders, law enforcers, research institutes, media and the civil sector join forces to address the problem of too many fatal road accidents.
“The deaths of some 60 people a day is unacceptable,” he insisted.
National Legislative Assembly vice president Surachai Liengboonlertchai expects “integrated efforts”, including campaigns for safe driving behaviour, to help significantly lower road accidents.