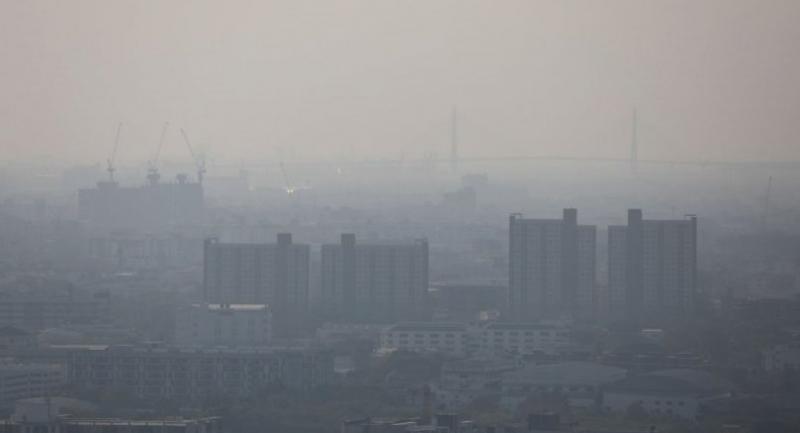 THE GOVERNMENT has begun planning ahead for the next “smog season” in Bangkok, preparing a graduated system of emergency responses and possibly a major upgrade for the transport sector.
Natural Resources and Environment Ministry Permanent Secretary Wijarn Simachaya yesterday announced that Thailand would follow South Korea’s example in tackling harmful PM2.5 dust.

Speaking at an academic seminar on air pollution and preventive measures at the Environment Quality Promotion Department, Wijarn said official procedures would be established for the agencies involved to follow, with controls in place for every source of pollutants.
Wijarn said smog season had now ended in Bangkok, but it’s certain that the capital and other provinces would again be shrouded in pollution next winter, when weather conditions were most conducive to the accumulation of PM2.5.
By that time, however, effective mitigation measures would be in place, he said.
“I recently visited Seoul to discuss their experiences in combating PM2.5 air pollution,” Wijarn said. “Both Bangkok and Seoul suffered from severe smog this year.
“I learned that South Korea has a set of procedures to guide agencies on how strictly they should enforce environmental-protection regulations and execute measures to reduce the release of pollution at every source, based on the severity of the smog situation at any given time.”
With different sets of control measures to cope with different levels of PM2.5, South Korea can more efficiently tackle the problem, he said. Thailand can replicate this strategy.

“The PCD [Pollution Control Department] has prepared a similar emergency-response plan based on the severity of the air pollution, which has already been presented to the Cabinet,” Wijarn said.
Disease Control Department deputy director-general Dr Kajohnsak Kaewjarus said the Public Health Ministry had also developed its own emergency-response plan in preparation for next winter’s smog.
“In monitoring air-pollution-related illnesses at 22 hospitals in Bangkok and neighbouring provinces, we noticed a jump in the prevalence of asthma, heart disease, chronic obstructive pulmonary disease and other respiratory diseases during smog season, confirming the threat that PM2.5 poses to people’s health,” Kajohnsak said.
“So the relevant agencies under the Health Ministry are closely working with the PCD and local administrative organisations to prepare for the next smog season and protect people from health threats.”
Yossapong Laoonual, a lecturer in mechanical engineering at King Mongkut’s University of Technology Thonburi, stressed that, unless the smog problem is dealt with at its sources, Thailand would suffer from severe air pollution every winter.

Exhaust from cars biggest polluter
He urged the authorities to upgrade vehicle engine and fuel standards to Euro 6 and ease traffic congestion in Bangkok to ensure sustained control of the smog over the long term.
Yossapong cited scientific studies that concurred the primary source of PM2.5 in Bangkok was exhaust from millions of cars, meaning it was crucial to focus on limiting emissions in the transport sector to ease air pollution.
“The standard for engines and fuel in Thailand is still Euro 4, which generates significantly higher levels of PM2.5 than Euro 6 – the standard most developed countries are now using,” he said.
“We are years behind many countries in terms of both the engine and fuel standard and environmental protection. So our industrial and energy sectors need to spearhead the effort to upgrade the engine and fuel standard to match the international norm and ensure a healthier environment in the future.”
Yossapong suggested the government encourage drivers to switch from combustion to electric engines, get old cars off the roads, promote carpooling and prod citizens to walk, bike or use public transport instead of driving.
Permanent Secretary Wijarn said the fuel standard would be upgraded to Euro 5 by 2021 and to Euro 6 by 2023. Meanwhile the public transit system was being extended and a tax cut on electric cars and higher tax on old vehicles were being considered, he said.