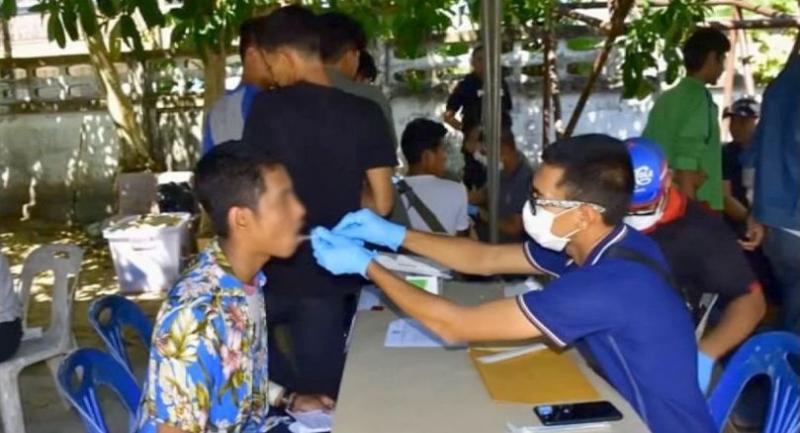 Rights foundation hits back, saying it is a clear violation of human rights, data can be misused.

PRIME MINISTER Prayut Chan-o-cha said yesterday that DNA samples were being collected from Army conscripts in the restive South for national security, and denied it was a violation of their rights.
“Everyone understands and is cooperating. The procedure is on a voluntary basis. It is meant for the national security database, as these people will only be part of the armed forces for two years,” the premier told reporters yesterday.
General Prayut was responding to the Cross Cultural Foundation (CrCF)’s call for the authorities to stop collecting DNA samples and destroy the ones already taken from conscripts in Narathiwat, Pattani and Yala, as well as from Songkhla’s four districts of Chana, Thepha, Saba Yoi and Na Thawi.
Prayut said this is the first time that DNA samples are being collected and that it will be done in the Deep South first before it is expanded to other regions.
However, the foundation’s director Pornpen Khongkachonkiet said the collection of DNA samples violated people’s right to physical autonomy and privacy. Citing CrCF’s statement on April 9, she said her group believes it is the government’s duty to solve the unrest in the South and bring the perpetrators to justice. In order to achieve these goals, the state needs to gain trust and cooperation from local people, which will only be possible if it respects people’s rights and operates lawfully, the CrCF statement said.
The DNA collection – which has caused anxiety among locals and will eventually deplete trust – subjected the conscripts to unfair discrimination and perpetuated negative stereotypes of them as potential insurgents and perpetrators of armed violence, the CrCF statement read.
Pornpen said the CrCF will demand an explanation from the Fourth Army Region chief of the real reasons and the laws and regulations used to back the action.
She added that these DNA samples can also be misused against their owners. “Does this mean that the Army can say I have your DNA samples, so whatever you do, I can arrest you?” she asked.

When the journlist asked if this is discrimination? I said yes but, and further said.

Pornpen said a pro-military Facebook page claimed 19,410 men had filled out a consent form from April 1 to 8 and volunteered to donate a sample, while only 49 refused to do so.
The annual military drafting was held from April 1 to 12.
The page claimed the DNA collection was part of the 10th Police Forensic Science Centre’s ongoing project to develop a database in the deep South.
National Human Rights Commission member Angkhana Neelapaijit said DNA samples must be provided voluntarily and not under coercion, as the men were not crime suspects.
They must also be informed about the impact the DNA sampling can have on their right to privacy, she said, adding that DNA can reveal a person’s risk of hereditary ailments.
Angkhana also wondered how these samples will be stored and what measures will be taken to ensure confidentiality.
Earlier, Yala special task force deputy chief Colonel Chalat Sriwichien had said that DNA tests were key in establishing links and identifying suspects in national security cases.
“Refusing to give DNA samples doesn’t mean you are a wrongdoer. You have the choice to say no, but as national security officials, we may wonder about the reasons for not wanting to undergo the test,” Chalat said.
DNA samples were taken from rangers and defence volunteers in the deep South and their guns registered so the authorities can check if the claims of violence reportedly perpetrated by state officials was true or false, Chalat added.