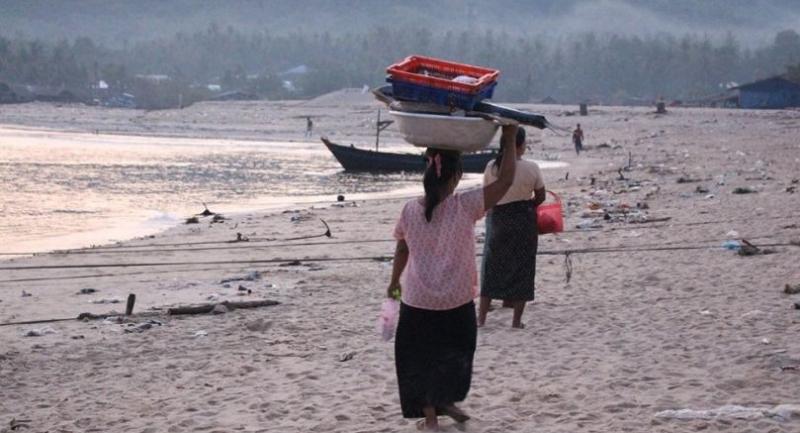 Communities in Dawei are turning to tourism as a new source of income and as an alternative to negative impacts from the industrial development that has already displaced many families and now threatens the pristine environment.

Set amid fruit orchards and betel-nut plantations, the village of Kalonehtar seems peaceful enough. But the tranquillity is mere surface appearance as residents fight waves of mega-projects continually crashing over the the Tanintharyi region.

Kalonehtar, with a population of just 1,200, is facing twin threats from a nearby dam that’s part of the Dawei Deep Seaport and Industrial Estate Development Project and a Dawei-Kanchanburi road link. People are worried their land will be expropriated.

United under the leadership of their village abbot, Punya Wunta, they have managed to halt both projects. But everyone knows the battle against unwanted development is far from over, as investors and Myanmar authorities continue to push mega-projects that would turn the peaceful countryside into one of the biggest industrial zones and major deepwater seaports in Southeast Asia.

“Everyone in Kalonehtar lives with fear and uncertainty,” Aung Kyaw Thet said. “If we fail to deter these harmful projects, we’ll be driven off our ancestral lands and lose our farming livelihoods for good.

“The community’s youth network has initiated community-based tourism development. Our aim is to teach the wider public about our struggle here, about our precious resources and our unique way of life, which will all disappear if the big projects get going.”

Though Kalonehtar looks simple and untouched to outsiders, Aung Kyaw Thet explains that the villagers have preserved the pristine forest nearby while continuing in their traditional way of life. The result is a rural hamlet plentiful in resources for tourism.

“Apart from a cultural tour that includes a homestay so that visitors can learn about the way of life and taste local dishes and fruit, we’ve also developed two eco-tourism programmes,” he said.

“Visitors can trek a 3.5-kilometre forest trail to learn about nature or opt for a bird-watching tour with a local guide to see the native fauna.” Though the tourism campaign only kicked off this year, the village welcomed 100 visitors in the first two months – |mostly Westerners and Myanmar students.

“We consider it a good start and intend to push our campaign further, because it not only raises public awareness about why we should protect Kaloneta and Dawei from large-scale industrialisation, it also generates income for the people. And it helps people maintain a good quality of life,” Aung Kyaw Thet said.

The campaign is just one of the many sparks emanating from communities in the Dawei area, with tourism plans being based on alternative development choices, said Luntharimar Longcharoen, a Thai independent researcher.

In the fishing village of Tizit, tourists can stay and learn their way of life or enjoy a cruise on the Dawei River, hopping onto fishermen’s rafts anchored mid-stream and learning how shrimp paste is made there. The village sites on the proposed site of the deepwater port.

“Dawei and Tanintharyi regions are rich in natural resources, picturesque and have pristine environments – all perfect for creating a booming tourism industry,” Luntharimar said.

“It gives the locals a great opportunity to build their economy in a sustainable way through tourism, which is not only a better option than heavy industry, but also ensures that profits generated go directly to them.”

She said the strategy is more promising because people find their own path of development, one in which they earn directly, whereas industrial development only profits investors.

“Even though work on the Deep Seaport and Industrial Estate has been halted, it can resume at any time once the investors and the authorities have sorted out their problems with the project,” she warned.

A May 3 report by the newspaper Prachachart Turakit noted that Premchai Karnasuta, chairman of Italian-Thai Development Co – a key investor in the Dawei development – had revealed that his firm was seeking assistance from both the Thai and Myanmar governments to restart the project. He claimed work could resume in the next few months.

According to the Dawei Development Association, the initial phase of the Deep Seaport and Industrial Estate has already displaced about 40 families in two communities in Yebyu township.

Also, a projected 790,000 people in Dawei will be affected by pollution and other environmental and health impacts due to large-scale industrialisation.