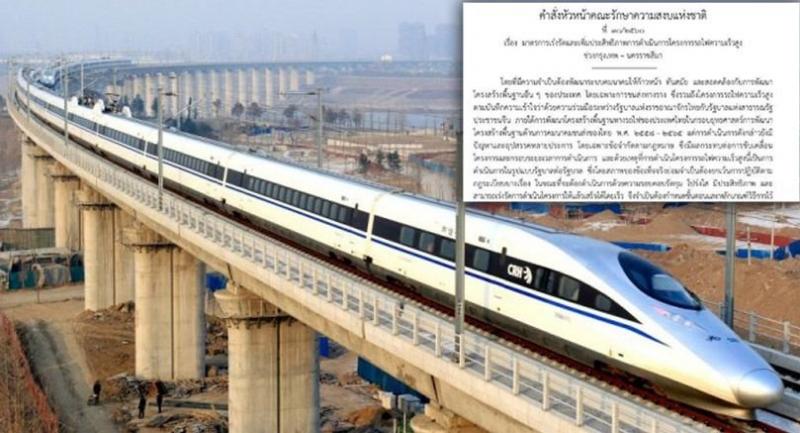 ACADEMICS and professional bodies are concerned about the government’s accountability for potential damages that may arise after multiple legal exemptions were granted to the Thai-Chinese high-speed railway project under Article 44 of the interim charter.

Sumet Ongkittikul, Thailand Development Research Institute research director, who specialises in logistics and infrastructure projects, asked who would be responsible for damages as the public procurement law will be overriden.

Since the National Council for Peace and Order (NCPO)’s order, which was issued yesterday, allows the government to bypass the normal bidding process, there will be no competition, which makes it difficult to get the best price for Thailand, he said.

He said China does not understand the way Thailand manages large investment projects so it seems to have imposed its own practices here.

Usually, investment projects proposed by the State Railway of Thailand must be screened by the State Enterprise Policy Office and the National Economic and Social Development Board before they are presented to Cabinet for approval.

Then, rounds of competitive bidding would be held to decide who will win the project in a process that creates a level playing field and ensures decisions in the best public interest.

Sakon Varanyuwatana, dean of the Thammasat University’s Economics Faculty, said that resorting to Article 44 of the interim charter to grant many legal exemptions will seriously affect the checks and balance mechanism on public infrastructure projects.

Samart Rachapolasit, a former deputy governor of Bangkok, said resolving legal obstacles alone will not be sufficient to get the Thai-Chinese high-speed railway project off the ground and turn it into an economically worthwhile investment. In his opinion, the extended delay has resulted from the incompetence of leadership at the Transport Ministry and State Railway of Thailand while he suggested that the first phase of construction should cover a total of 252 kilometres from Bangkok to Nakhon Ratchasima, not just 3.5km as planned by the ministry. In addition, Samart said, there must be an integrated railway and urban development plan which includes new towns, industrial estates, universities and a provincial government office along the route.

However, deputy premier Somkid Jatusripitak said it is necessary to push forward with the scheme since it will also link Thailand with other Asean countries.

“We should not be concerned only about the commercial value of this project as it will link the Thai economy with other countries in Asean and with China, that will create a long-term economic value. We will push forward this project and extend the route to Nong Khai province (to link with Laos),” Somkid said.

Transport Minister Arkhom Termpittayapaisith said construction work is expected to start in August or September this year for the first phase of the project from Klang Dong station in Nakhon Ratchasima to Muang district in Nakhon Ratchasima with a total distance of 3.5km.

Afterwards, the ministry will move to work on the second phase of 11km, the third phase of 100km and fourth phase of 119km, linking Bangkok with Nakhon Ratchasima.

The Bangkok-Nakhon Ratchasima route will cost more than Bt170 billion.

The route will be expanded from Nakhon Ratchasima to Nong Khai.

He said the ministry also is negotiating with the Architects Council of Thailand and Engineering Council of Thailand on issues concerning Chinese engineers and architects. “They will have to apply to get licences to do business in Thailand, but under Article 44, both professional bodies in Thailand will speed up licences for them as they need to qualify to work here.”

Meanwhile, Duangrit Bunnag, the famous architect, said the NCPO order, which granted exemptions to Chinese architects and engineers to work on the project, was in violation of seven international agreements, including the Asean Mutual Recognition Arrangement on Architectural Services, Asean Framework Agreement on Services, General Agreement on Trade and Services, Nation Treatment, Most Favoured Nation and the Principle of Non-Discrimination under the WTO

“Doing architectural work in Thailand is not only regulated by Thai law, but also many international regulations and it is also connected with many Asean agreements and WTO agreements,” Duangrit said.

“By using the sweeping powers under Article 44 of the interim charter to allow Chinese architects to work in Thailand without passing the formal procedures on Thai Architect Act, the architects from other countries can use this exemption as well on the Principle of Non-Discrimination and it will mean that everyone can work as architects in Thailand without having the official licence to do so.”

He warned that this will cause unfair competition between Thai architects, which still need to follow the formal regulations, but the foreigners can just walk in and take the architect job. Moreover, they do not have to be responsible for mistakes on their works, which could cost lives.

Faculty of Architecture Silpakorn University lecturer Chatri Phakitnonthakan also said that another concerning issue was the waiving of the regulations listed on the Article 3 of the order, which allow the project progression to skip many monitoring and control systems for the sake of fast progression.

“I am worried that this order will cut off the monitoring and control system to the project, which will not only open the door for corruption, but also we have no assurance that the project will be safe and properly built on standards,” Chatri said.

“These legal exemptions will not allow proper inspection of the quality of planning and construction work, even though Chinese architects might be good at their job.”

Chatri also urged the Architects Council of Thailand and Association of Siamese Architects (ASA) to state their stance on the issue, with ASA executives already expressing serious concern.

Agricultural Land Reform Office (ALRO) secretary-general Sompong Inthong said there is also a plan to issue another NCPO order to allow the use of ALRO land for high speed train construction.

“We’re discussing whether to amend the law or issue the NCPO order by using the power of Article 44 to solve this problem, but it is quite definite that there will be new NCPO order to unlock this problem,” Sompong said.

“We understand that there will be many farmers who will be affect by the high speed train project, but they will be properly compensated for their loss of land.”