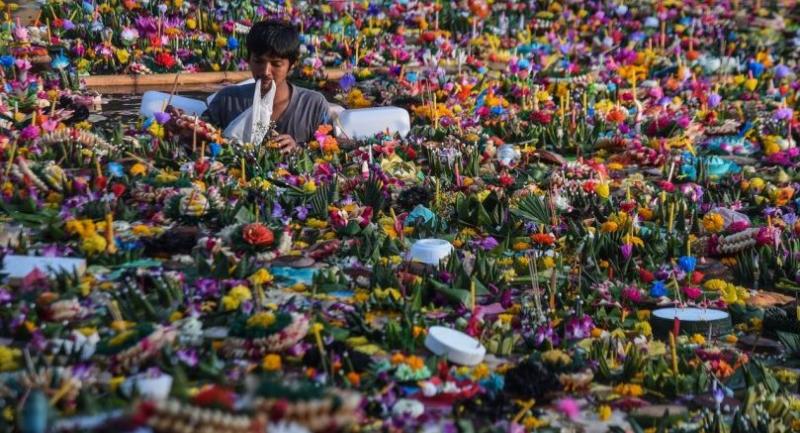 After the festival’s last krathong floats away, the nationwide clean-up begins

AFTER the night of Loy Krathong came the morning of tidying up. Yesterday, authorities and people across Thailand rushed to collect, clear and transform krathong remains and garbage left from the Water Goddess blessing festival.

Two hundred Bangkok Metropolitan Administration (BMA) officers rushed to collect krathong floating in 30 public areas organised for the festival on Friday night. Thirty-one garbage collecting boats and three garbage crushing boats worked hard along 34 kilometres of Chao Phraya river.
BMA Governor Pol General Aswin Kwanmuang said yesterday that by 5am, they had collected 811,945 krathong in Bangkok, 93.6 per cent of which were made from natural materials while the rest were made from foam.
The natural ones would be transferred to a waste factory in Nong Khaem district, where they would be turned into organic fertiliser. Those made from artificial materials would be buried to decompose, Aswin said.the BMA garbage collectors clean up a pond in Kasetsart University's Bang Khen campus in Bangkok

For many years, natural krathong have been promoted nationwide as eco-friendly and they are increasingly popular. They are often made of banana tree trunks, banana leaves and flowers put together with incense sticks and candles. Some are made from bread to feed the fish.
Some local authorities, such as those in Buriram, prohibited the sale of krathong made from artificial materials.
Although these types of krathong can decompose naturally, their massive quantities can spoil the water and pollute the atmosphere if they remain uncollected. Hence, they are often collected as soon as the full moon festival is over.
The usually popular Loy Krathong festival gained even more lights this year as it was held on Friday. Local officers in Nakhorn Ratchasima estimated that the canal surrounding the province’s Muang district could receive hundreds of thousands of krathong.
But in many places, such as in Bangkok, the festival was toned down and organised in a minimal manner given that it was only a few days after the end of the year-long mourning period for His Majesty the late King Bhumibol Adulyadej.

Drunk driving
While most annual Loy Krathong festivals involve deaths and injuries from drowning, firecrackers and road accidents, police said yesterday that they had not heard significant reports of such from local hospitals and emergency agencies.
But the toll from drunk driving would still need to be collected and finalised with local officers, said police spokesperson Pol Gen Wirachai Songmetta.
However, in Ayutthaya’s Wang Noi district yesterday, an eight-year-old boy, Jessada Liamlumpha, drowned after swimming in an irrigation canal, where he had hunted for coins in floating krathong.
People participating in the festival often put coins in their Krathong to make wishes with Ganga, the Water Goddess, according to traditional Thai belief.
In the Northern region, peoples also set off flying lanterns along with their floating krathong as part of their long-held Yipeng tradition.
This, however, caused Chiang Mai International Airport’s runway to be scattered with 81 flying lanterns – three of them with diameters larger than 1 metre.
The Yipeng tradition continued yesterday and officials called on revellers to float their lanterns only between 7pm and 1am.

remains of Krathong in Songkhla