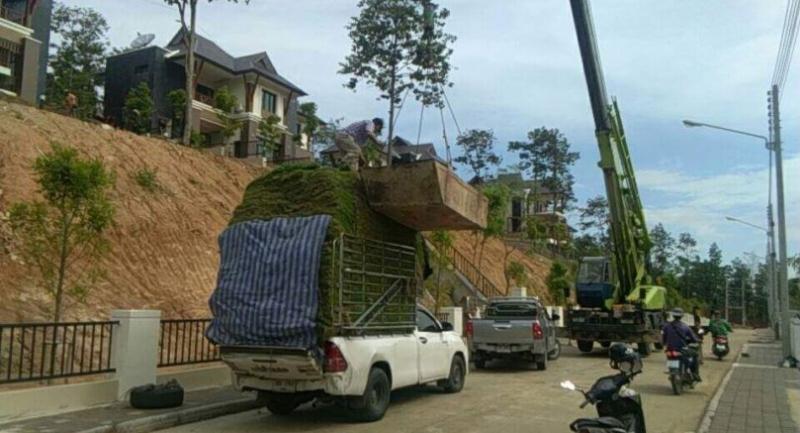 A CHIANG MAI citizens group yesterday threatened to stage a large demonstration next month if nothing was done by then to restore the land housing a luxury housing project on Doi Suthep Mountain to its original state.

The group coordinator accused the government of failing completely to keep its promise.

Teerasak Rupsuwant, coordinator of Doi Suthep Forest Reclamation Network, yesterday accused Prime Minister General Prayut Chan-o-cha of not being true to his word by allowing Justice officials to stay in apartment blocks built on disputed land on the mountain that locals see as sacred. The premier has broken his earlier promise of not allowing anyone to live on the disputed land, he said.

All residents must be removed from the nine apartment buildings on the disputed ground, and the entire encroached forestland restored, or the network will stage a large demonstration in Chiang Mai in August, said Teerasak.

There are still 45 villas at the upper end of the housing estate, along with nine apartment buildings for Justice officers of Appeals Court Region 5, according to Doi Suthep Forest Reclamation Network. They have encroached beyond the original tree line and into Doi Suthep Forest and must be dismantled and the forest restored, as agreed between the network and official authorities, the network insisted.

Teerasak said that though the 45 villas were unoccupied, more than 30 Justice officers and their families have already moved into the apartment buildings, which is a clear violation of the mutual agreement between the network and the government.

After it was disclosed that some Justice officers were living on the disputed land, Prayut said all people should be sympathetic to them. They were lower-rank officers and should be allowed to live in the apartments until new official residences were built and ready for occupation, the premier said.

Teerasak responded that Prayut was not taking his promise seriously, after having announced to the media two months ago that no one would be permitted to live in the buildings.

Furthermore, these officers were clearly not low-rank officers, said Teerasak, as they owned very expensive cars. They could simply move back to their own houses, he retorted.

“About the delay in land reclamation and reforestation, we urge the government to settle this problem as soon as possible or Chiang Mai citizens will certainly launch public demonstrations again,” he said.

Meanwhile, in a resolution from the latest meeting held yesterday between the network and official agencies, all stakeholders agreed to demolish the 45 villas to prevent damage from a landslide but there was still no clear solution for the nine apartment buildings in the disputed area.