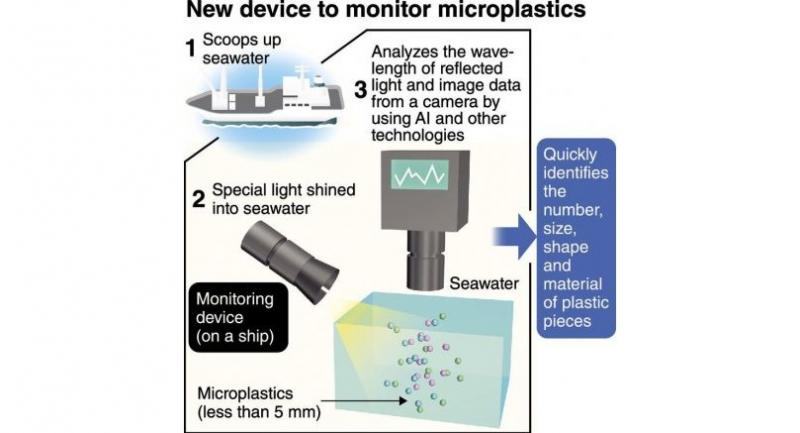 The science ministry plans to develop a new device to monitor microplastics (see above) in the sea using artificial intelligence and other technologies, according to informed sources.

There are concerns about the harmful influence of microplastics on the ocean's ecosystem, so the Education, Culture, Sports, Science and Technology Ministry plans to develop a device that will automatically measure the amount and type of such waste. The development is scheduled to take five years, from this fiscal year to fiscal 2022.

Microplastics have been found in the oceans and in the bodies of marine animals across the world, but detailed information about this pollution is not available, due to the time needed for observation. The government will speed up efforts to understand the extent of microplastic distribution in the sea and its influence on the ecosystem, according to the sources.

Using information such as the wavelengths of light reflected when a special light is shone through seawater, and images taken with a high-resolution camera, the device will automatically observe the size, shape, type of material and number of pieces of microplastics. It will be able to be installed on a survey ship and gather data based on water scooped up from the sea while sailing.

The system will be able to detect plastic waste even if a piece is smaller than 0.1 millimeters. The AI technology — which will have learned about the features of microplastics — will be able to analyze as much as 300 liters of seawater per hour.

The device will be developed by organizations commissioned by the technology ministry, such as the Japan Agency for Marine-Earth Science and Technology (JAMSTEC) and private companies. They plan to start on a detailed design this summer and conduct tests as early as 2021, with a completion date of fiscal 2022. The development budget is expected to total about ¥200 million.

In the past, researchers used plankton nets to collect microplastics in seawater, then took the waste back to their institutes to analyze it one by one with microscopes and other equipment. The gaps in the mesh of plankton nets are generally as large as 0.3 millimeters, so it is difficult to collect pieces of plastic smaller than that.

Microplastics have spread to the Pacific Ocean, the Arctic Ocean and the Antarctic. They have also been detected in deep-sea fish and shellfish, as well as in small fish such as sardines. According to a survey conducted by the Environment Ministry in fiscal 2016 in the sea surrounding Japan, in some waters no less than about 70 pieces of plastics were found in one cubic meter of seawater.

Small pieces of plastic less than five millimeters in diameter that originate from such objects as plastic grocery bags and plastic bottles. These waste plastics flow into the sea and are broken down by ultraviolet rays and waves, eventually becoming microplastics that easily absorb toxic chemical substances. A research group from Kyushu University and other organizations plans to study the effects that microplastics have on marine animals such as seabirds, fish and shellfish when they get into their bodies. The research will start this fiscal year.Speech