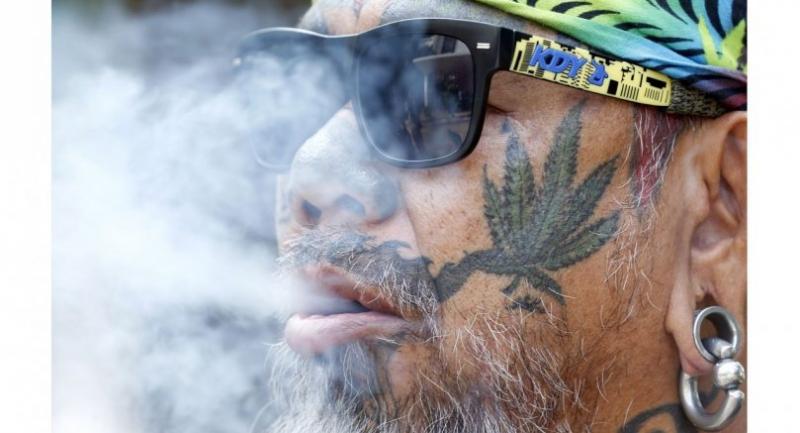 A Thai man with a marijuana tattoo on his face smokes and looks on during a protest held to show opposition to the patent for marijuana extracts, outside the Government House in Bangkok, Thailand, 20 November 2018. // EPA-EFE PHOTO

ALL APPLICANTS for cannabis-related patents in the Intellectual Property Department (IPD) are foreigners, raising suspicion that the rush to legalise marijuana may have been designed to grant monopoly to certain groups. “Will the move pave the way for monopolies?” Panthep Phuaphongphan, dean of Rangsit University’s Institute of Integrative Medicine and Anti-Ageing, asked yesterday.

According to him, Thais are still not allowed to conduct research on marijuana-based medicines, but some foreigners have already filed applications seeking patents.

So far, the number of total applications submitted lies between 11 and 13, and some of them have already been rejected.

“If the Intellectual Property Department does not throw out all these applications now, we will consider taking legal action against it,” Panthep said.

“This might go against the law. According to law, a patent can only be granted to a new invention. It should be noted that traditional Thai medicine has long recognised marijuana’s medicinal properties,” he said.

Panthep emphasised that if the draft law legalising the medical use of marijuana sails through, then relevant authorities should ensure that cannabis can also be used in Thai traditional medicine. In recent months, several authorities have been pushing hard for the legalisation of medical marijuana. At one point, Deputy Prime Minister and Justice Minister ACM Prajin Juntong even considered the possibility of Article 44 being invoked as a means to allow the medical use of cannabis.

With much lobbying, the bill to legalise medical marijuana has already gone to the National Legislative Assembly (NLA) now.

“We will start deliberating the bill on Friday,” NLA member Somchai Swangkarn said, adding that he expected the deliberation to take 60 days.

However, the NLA is not ignoring concerns over cannabis-related patents, and summoned an IPD representative to testify yesterday.

Direk Boontae, IPD’s deputy director-general, said patent applications could be revoked if the requests are deemed as illegitimate.

“Some applications were submitted to us since 2004, but we never approved any cannabis-related patents,” he insisted.

“There are just seven cannabis-related applications pending as of now,” he said.

Marijuana is believed to have medical benefits for Alzheimer’s, Parkinson’s, seizures, alleviating pain and promoting appetite.