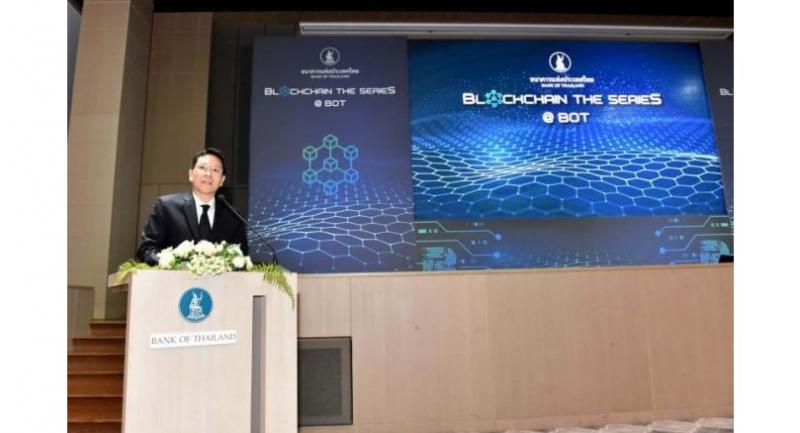 A total of 22 Thai banks and foreign-bank branches have joined hands to build an electronic Letter of Guarantee (e-LG) network on blockchain via BCI (Thailand) Co Ltd with support from the Bank of Thailand (BOT).

Claimed to be the first of its kind anywhere, the effort aims to achieve a 50 per cent increase in the use of blockchain-based e-LG by Thai businesses within three years, which will help slash operating costs.

The initiative is expected to bolster competitiveness for both businesses and the nation as a whole, BOT Governor Veerathai Santiprabhob said on Wednesday.

He added that the cooperation under the Thailand Blockchain Community Initiative demonstrated tangible progress in embracing the new technology in the financial and business sectors.

BCI (Thailand) Co Ltd was formed to drive blockchain collaboration that will cover a growing number of services and stakeholders.

Predee Daochai, chairman of the Board of Directors of BCI (Thailand) and of the Thai Bankers' Association, said that blockchain technology has become widely accepted and increasingly adopted worldwide, with Thailand climbing aboard the bandwagon to enhance convenience and security of business operations, also resulting in significant reduction of paperwork.

To strengthen the collaboration under Thailand Blockchain Community Initiative, BCI (Thailand) is focusing on research and developing technologies and innovations. Connecting all participating banks on the common platform, the blockchain system can now grow to become national infrastructure. This will promote the adoption of the new technology in all business segments, as well as enhancing the efficiency and competitiveness of the Thai business sector and economy for sustainable growth.

e-LG is the first service launched by BCI (Thailand), enabling small and large companies easy and affordable access the digitalised services. This will help reduce costs associated with document and data management under international security standards. With the front-to-end implementation of blockchain based on cloud technology, the service also offers greater flexibility, security and accountability. It also helps eliminate forgery of LG documents, providing efficient service delivery and verifying transactions around the clock and significantly shortening the time taken for the process.

The e-LG on blockchain is expected to go live in June under the BOT’s regulatory sandbox, before introducing additional beneficiaries in the third quarter of 2019 and providing other blockchain-based services in the future. The three-year target is for 50 per cent of all LGs issued in Thailand to be blockchain-based. At present, more than 500,000 LGs, worth over Bt1.3 trillion, are issued annually by both public and private financial institutions.