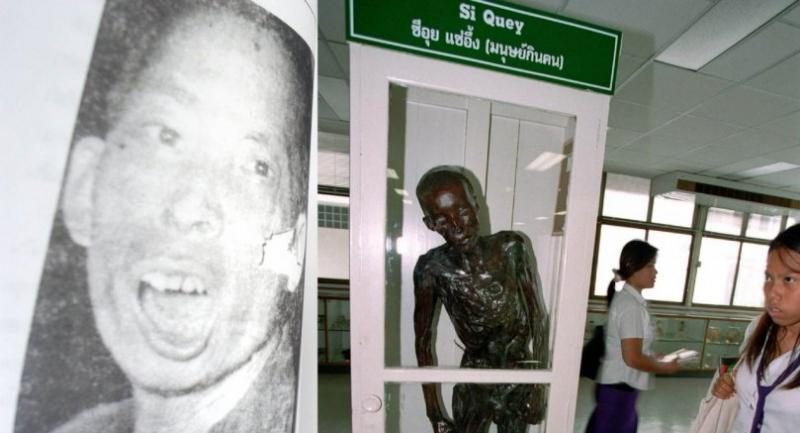 Siriraj Medical Museum has removed a “cannibal” sign from a glass box containing the embalmed corpse of alleged Chinese serial killer Si Quey after an online campaign to restore his dignity.

Dr Prasit Watanapa, dean of Mahidol University's Faculty of Medicine Siriraj Hospital, said on Friday that in order to comply with the public demand, the museum has removed the problematic sign.

Prasit said that the museum is now working on an information board, which will contain all the details about Si Quey’s criminal cases - including circumstances of each murder case, the evidence, and the court verdicts - to inform the museum’s visitors about his historic cases.

The issue over the violation of Si Quey’s dignity became a hot online topic earlier this month after Twitter user @ChangeSiam kicked off a debate over whether Siriraj Medical Museum should stop displaying the corpse along with a label stating that he was a cannibal. Many netizens echoed in agreement, with over 10,000 putting their names on an online petition at change.org calling on the hospital to arrange a proper funeral for Si Quey, granting him some respect after more than 60 years of public humiliation.

Si Quey was a Chinese migrant who moved to Thailand shortly after the end of World War II. Though he was blamed for the murder of seven children between 1954 and 1958 in Prachuap Khiri Khan, Nakhon Pathom, Bangkok and Rayong, he was only found guilty of one murder in Rayong.

He was sentenced to death by firing squad in September 1959, and after he was killed, the Siriraj Medical School asked to use his body for autopsy study. Later, the body was embalmed and put on display with the label “cannibal” at Siriraj Medical Museum.