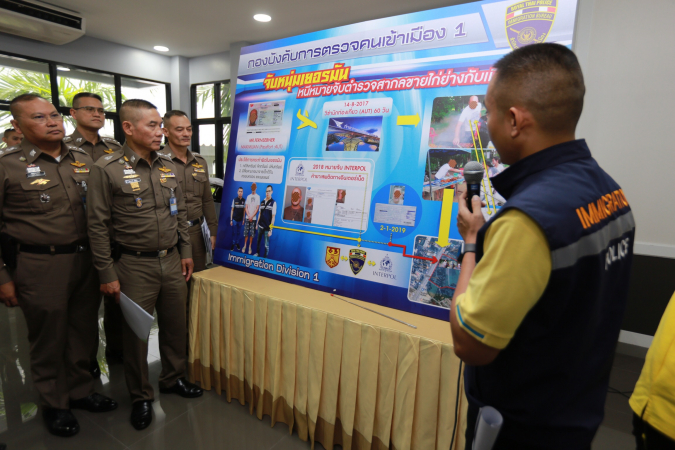 A German fugitive hiding in Thailand since 2017 has been arrested after a photo of him helping his Thai wife sell barbecued chicken was shared on Facebook.

A Facebook user took the photo of Maximilian Fernsebner, 34, and posted it online to praise him for helping out his wife on her stall in Nakhon Ratchasima’s Pak Chong district.

The post was widely shared, eventually drawing the attention of German embassy officials. They alerted Thai police that Fernsebner was wanted by Interpol for allegedly selling drugs online, robbery and disseminating child pornography.

Fernsebner fled as police arrived to arrest him at his village of Ban Pong Prathoon. He took refuge in a nearby swamp for the next two days. But after being hunted down and surrounded, he called the German embassy and asked to surrender to its officials. When they arrived at the scene, he gave himself up and claimed to have evaded capture by submerging himself and breathing through a plastic straw.

He was finally arrested by police at 10.30am on Tuesday.

Pol Maj-General Pruetthipong Prayoonsiri, commander of Immigration Police Division 2, said Fernsebner entered the country in 2017 when the Interpol warrant had not yet been sent to Thailand.

He later left the country via a Nakhon Phanom border post before hiring a Lao man to smuggle him back across the Mekong River by boat. After sneaking back into the country, he married a Thai woman and took up residence in the quiet northeastern village, only to be discovered by chance after his photo went viral.