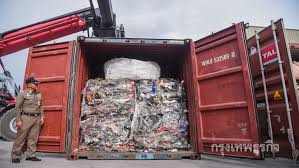 The Customs Department has implemented urgent measures to prevent smuggling of electronic and plastic waste into the country after Bt17.5 million worth of the waste shipments were intercepted, the department chief said.

He said Thailand had earlier imported hundreds of thousands of tonnes of plastic and electronic waste each year.

In early 2017, the import quota of plastic waste was reduced to 70,000 tonnes yearly and the imports have been declining because of tight control by the state, he said.

But since the plastic and electronic waste was still needed in the country, smuggling attempts into the Kingdom are continuing, prompting the department to come up with three measures.

First, the department will regularly analyse the situation to narrow targeting of suspected smugglers and would immediately check and investigate suspects.

Also, all customs checkpoints have been ordered to strictly check cargo that may include smuggled electronic and plastic waste.

As well, customs officials will no longer slap fines on smugglers of electronic and plastic waste but instead hand the cases over to police to seek criminal charges.