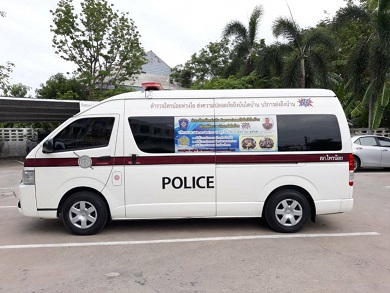 By Supachai Sinprasert
The Nation

To help commuters travel safely from work to their homes at night and also prevent crime, the Sai Noy Police Station in the central province of Nonthaburi has launched a pilot project that sees police vans providing free rides between 10 and to 11pm on three routes where housing estates alternate with isolated rice fields.

Public transport services in the area end have already ceased to operate by 10pm and the police vans prevent workers from being stranded or forced to take a taxi.

The project, dubbed "Sai Noy Police Care and Take You Home Safely”, was introduced on June 1 and will continue through August 31. The results will then be assessed to determine whether it should continue or not, though it has so far received such positive feedback that a private sector business has chipped in to support fuel costs, said Sai Noy deputy superintendent Pol Lt Colonel Krittipong Rungrojchote-udom. “Besides making people feel safe at night and giving them a convenient travel option, it also helps prevent crime and can be regarded as having police patrolling the routes,” he said. The three routes - all staring from the Sai Noy precinct – cover the Sai Noy-Bang Kleuy Road, the Sai Noy-Nong Prao Ngai, and the Sai Noy-Wat Yot. Police officers rotate the duty with two officers for each van.