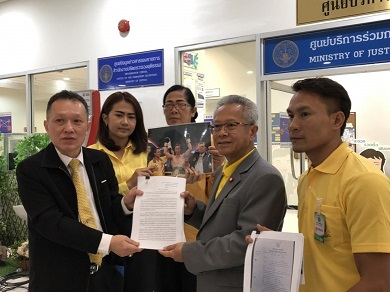 Relatives of WBC Asia super lightweight champion Atchariya Wirojanasunobol, who is in jail on charges of drug smuggling, presented evidence of his innocence to the Justice Deputy Permanent Secretary Tawatchai Thaikyo on Wednesday.

Atchariya was arrested at the airport on April 8 as he was about to board a flight to Japan for a boxing match. He was accused of involvement in smuggling 3.4 million methamphetamine pills that had been seized in Ranong's Muang district in November 2018.

Tawatchai said his officials would speedily review the evidence delivered by Atchariya's wife Nalinta Jeeradechanadol, Nakhon Pathom-based boxing gym owner Ekkawi Kaewmanee and lawyer Worakorn Pongthanakul. A decision would then be made on granting financial assistance from the Justice Fund to bail out the 30-year-old Atchariya before his court case on July 22. The evidence included a video clip in which a female suspect nabbed in November’s bust confirmed that she didn't know Atchariya, as well as documents recording the sale of the car in which the drugs were found.

Lawyer Worakorn said that Atchariya had been linked to the case because he sold the car to Ekkawi, who then sold it to a second-hand car dealer – where it was bought by the drug smugglers. The car was still under Atchariya's name when it was seized by police, who then arrested the fighter. Atchariya is currently in detention in Ranong.