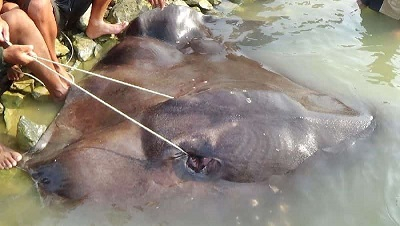 The Pollution Control Department (PCD) and Fisheries Department have slapped a Bt5.78 million lawsuit on a Ratchaburi Ethanol Co factory for allegedly discharging toxic waste in the Mae Klong River in 2016, which killed more than 50 critically endangered giant freshwater stingrays and scores of other fish, PCD chief Pralong Damrongthai said on Wednesday.

Piles of the dead fish were found washed up on the shores of Mae Klong River in Ratchaburi and Samut Songkhram provinces on October 1-7, 2016.

Investigation showed that the fish had been killed by distillery slop discharged into the Khlong Chalaeb canal, which flows into the Mae Klong River, Pralong said. The two parties will meet on August 26 for an out-of-court settlement, but if no agreement is reached, the case will go to Ratchaburi Court, he said.

The Bt5.78 million compensation covers the Bt306,440 PCD spent on assessing the environment, while the remainder is sought by the Fisheries Department for the damages done to nature, he said.