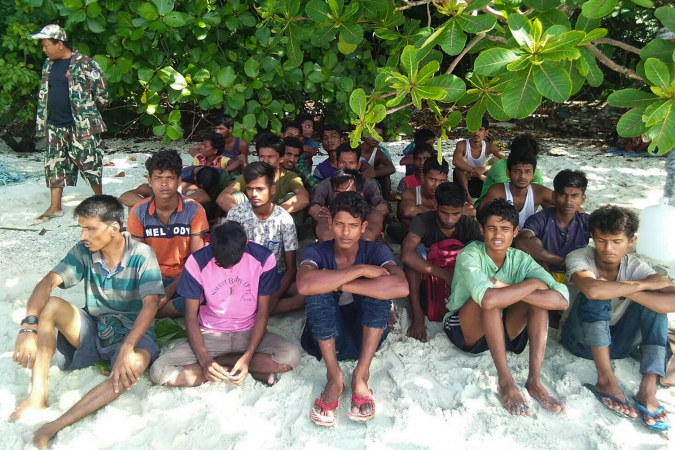 This handout picture taken on June 11 and released by Thailand’s Department of National Parks, Wildlife and Plant Conservation on June 12 shows a group of Rohingya sitting on the sand at the Tarutao Marine National Park on Rawi island, southern Thailand.

The Rohingya community in Thailand on Saturday urged visiting United Nations human rights expert Yanghee Lee to help improve their lot, as thousands of them in Myanmar have no legal status while many are still under detention.

Thousands of Rohingya have fled their homes in Myanmar’s Rakhine state to seek better lives in Thailand for decades but the Thai authorities have not granted them any legal status on the grounds that they are stateless people.

Known as Bengali at home, Myanmar does not recognise the ethnic group as its citizens. Thailand regards them as illegal migrants and hence the group is not considered in the national verification process, which is necessary for them to have the legal right to work and live in the country.

“As we are not considered for national verification, we are not able to live and work legally in Thailand,” chairman of the Rohingya Association in Thailand, Siyeed Alam, told The Nation. “Many of us have been here for 20-30 years, but we are still illegal migrants.”

Lee is the UN special rapporteur on human rights in Myanmar but has been barred from entering the country since December 2017 following her strong criticism of the government over its human rights practices, notably in the Rohingya crisis.

Lee is visiting Thailand and Malaysia from July 8-18 on a fact-finding mission to speak to refugees in the two countries. She was scheduled to meet with Thai officials and human rights defenders.

More than 700,000 Rohingya have fled violence in Rakhine state to Bangladesh since August 2017 after the Myanmar military undertook a clearance operation in response to militant attacks. The operation killed thousands of Rohingya and the refugees suffered atrocities including arson, torture, murder, gang rape and massacre while fleeing the strife-torn state.

Some of them made dangerous journeys to Southeast Asian nations like Thailand and Malaysia. A group of 65 Rohingya landed in the southern Satun province last month as their hired boat was out of order en route to Malaysia. Thai authorities treated them as victims of human trafficking and held them in immigration facilities where conditions are not much different from those in prisons.

“Our Rohingya people, including women and children, have been detained there for a long time, said Alam. “They deserve better treatment, including healthcare and education for children.”

The Rohingya Association in Thailand wants the senior UN official to add their account in her report and pressure the Thai authorities to provide them proper legal status as well as better treatment. Lee is scheduled to conclude her visit to the two countries with a press conference in Malaysia on Thursday.