Sumaiya Minga leaves Muang Pattani police station after filing a complaint about the treatment of her husband Abdulloh Esormusor, who fell into a coma in mysterious circumstances while being detained at a military camp.

The family of a Thai Muslim man who has been in a coma for two days since being detained by the army is demanding an inquiry into what happened to him.

Abdulloh Esormusor, 34, was apprehended by security officers at 4pm on Saturday and held in custody at Ingkhayuth military camp in the southern province of Pattani until he was found unconscious at 3am the next day and rushed to hospital.

On Tuesday he remained unconscious and in a critical condition, being kept alive by a breathing machine, with his brain reported to be swollen, haemorrhaging and unresponsive. He was transferred on Monday from Pattani Hospital to the better-equipped Songklanagarind Hospital in Songkhla province.

His family is demanding justice, convinced he was assaulted while in custody at Ingkhayuth military camp for questioning over a national security related case.

Amnesty International Thailand called on Monday for an “independent, impartial and effective investigation” to ascertain whether Abdulloh was subjected to an act of torture. If so, said the group, Thailand must ensure that those responsible were found and brought to justice.

On Tuesday, National Human Rights Commission (NHRC) commissioner Angkhana Neelapaijit weighed in too, declaring that her agency would urgently investigate the case.

“The problems are the [difficult] access to the scene, the fact that the man had no visible wounds, and the relatives’ delayed access to him,” she said.

Abdulloh’s family believes it highly unlikely he simply lost consciousness for no reason, saying he had no previous serious illnesses.

Angkhana also said the relatives were worried as government officials had been checking on would-be visitors and reportedly blocking their access, claiming he was a flight risk. “How could he, in this state, be a flight risk? Also, he is no more than a person of interest in a case,” she said, adding that access to him had improved since his transfer from the local hospital.

Abdulloh’s wife, Sumaiya Minga, lodged a complaint with police at the Muang Pattani Police Station about what happended to her husband and also about the officers' taking photos of his visitors at hospital as such action made them feel unsafe.

Angkhana claims that this case is just the latest in a long line of alleged torture in the three southern border provinces of Yala, Pattani and Narathiwat. She said the Commission had received 100 such claims, many of which involved “wound-less torture” perpetrated against detainees, who had not been allowed to sleep or received visits by their families.

The NHRC has been pushing for the authorities to allow relatives to visit to detained suspects. It also wants the law changed forcing authorities to present suspects at court, so they can be questioned by judges to confirm their welfare, whenever they have been held beyond the legal seven days, she said. 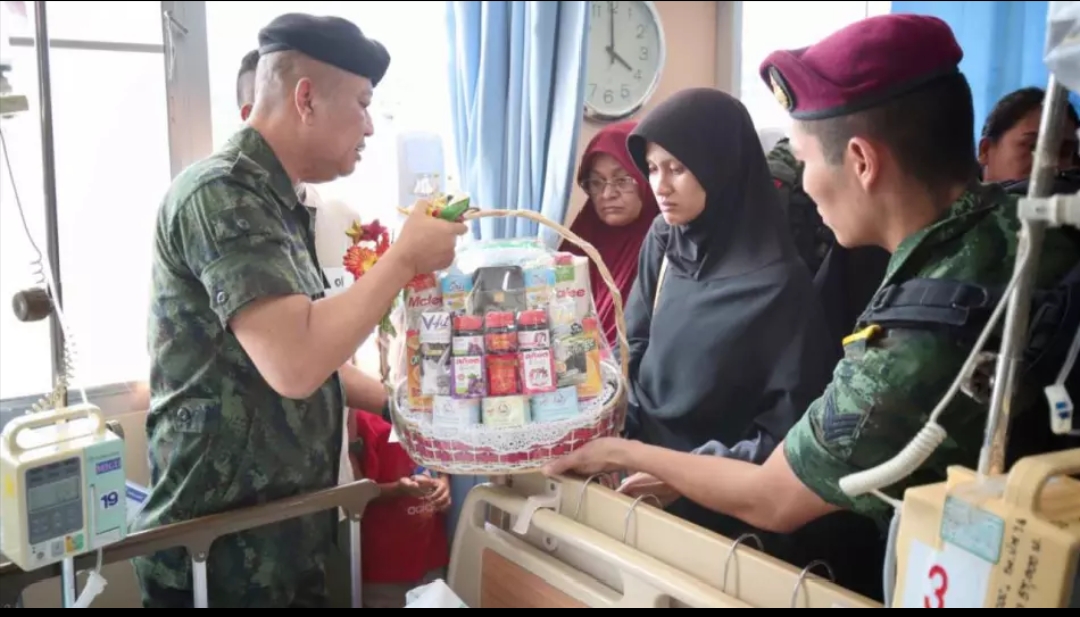 Fourth Army Region commander Lt-General Pornsak, while visiting Abdulloh at Pattani Hospital on Monday, had said he would have the case investigated and justice delivered, even if that involved military officers being punished.

Angkhana, however, expected the army probe to produce nothing significant, as Abdulloh sustained no visible wounds and that the family would eventually just receive only “remedial measures”. Only in cases where victims sustained visible wounds was it easy for the culprits to be arrested, she said.

The Internal Security Operations Command’s Region 4 Forward Command has so far offered the following version for what happened:

Abdulloh was held in custody after a man previously arrested implicated him in a crime. His apprehension on Saturday was done “by the book”, witnessed by community leaders and put into the police records before he was sent to the camp, where he arrived at 7.30pm.

A camp hospital check-up showed he was generally healthy, although appearing to be stressed after initial questioning. He was sent to his detention room at 10pm, found unconscious in the toilet at 3am and rushed to the camp hospital, which then referred him to Pattani Hospital.

The army’s initial inquiry had found no evidence suggesting his brain injury stemmed from anything done by the officers and that Abdulloh, having no wound, was diagnosed at Pattani Hospital as having brain swelling which could have come from oxygen deprivation.

Abdulloh’s wife insisted that her husband had no chronic ailments and had never fallen ill throughout the eight years they had been married. She recalled that officers who apprehended him at their home in Sai Buri district refused him permission to be able to pray first, citing it wasn’t the time of day to pray, and also wouldn’t give any reason for his arrest. Fifteen hours later, the wife went to the camp to visit him and was told he had a fever and was in an ICU room at Pattani Hospital, so she rushed there.

At the hospital, where she was told her husband suffered from a swollen brain, the wife recalled seeing him lying unconscious with a slight wound in left leg and a bruise on his hand, both of which were not there before he was taken to the camp. She said she was convinced his condition stemmed from something other than a normal ailment.

Abdulloh worked as a handyman and was the sole supporter of his 60-year-old mute mother, his wife and their two children. His elderly mother was now in distress, crying all the time and refusing to eat because she was so worried about her son, the family said.

Meanwhile, Narathiwat MP Kamonsak Leewamoh said the government must urgently provide clarity about the incident, the year’s second case of injury to a suspect in custody in the region, and prevent any recurrence. Although the deep South is under martial law, it must respect people’s rights and liberty, he said, suggesting there may be a time to review the use of martial law as in the past 15 years it had sometime created conflicts which weren’t helpful to the creation of peace in the region.