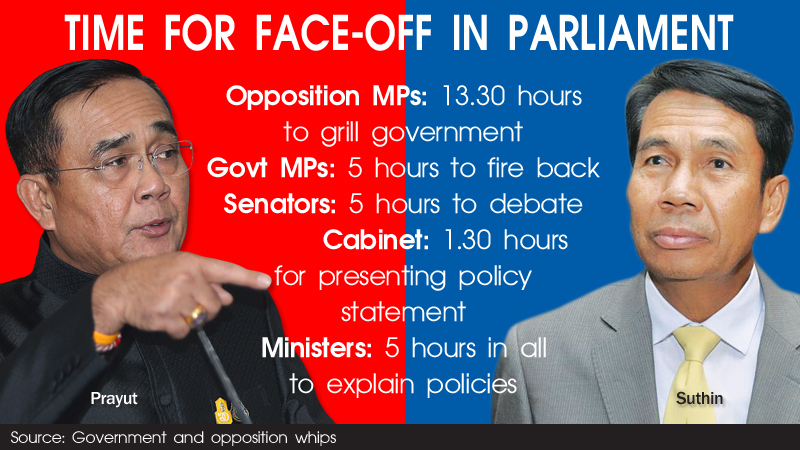 By THE NATION
Political Desk

Planning to make the most of the 13.30 hours allocated to them during the government policy debate on Thursday and Friday, 80 opposition MPs are getting ready to attack Prime Minister General Prayut Chan-o-cha and his Cabinet members, opposition whip Suthin Klungsang said on Tuesday.

The coalition government, meanwhile, has insisted that each and every MP on its side has to be present in Parliament for the debate.

Suthin said the opposition will not just focus on government policies, but will also question the qualifications of the ministers, though he added that they will only focus on facts and not bring up personal issues, so the other side doesn’t start protesting.

He added that the government, opposition and senators have all agreed that the time allocated for debate will be reduced if the person debating at any given time is interrupted.

“Pheu Thai MPs will avoid subjects that will encourage interruptions from the other side. If they cannot do that, then they are not good at debating,” Suthin said.

He said he was not worried that the Phalang Pracharat Party has 20 MPs ready to fire back at the opposition, because only two of them – Weerakorn Khampragob and Wirat Ratanaset – have any experience in Parliament debates.

He is not worried about the Democrat MPs either, because though they are more experienced as opposition MPs, adding that he does not expect the Democrats to put forward a strong debate either.

Suthin also warned senators, saying they should stick to their job of scrutinising as set by the Constitution, and avoid defending the government side.

Wirat, as chair of the government whip, said that every coalition member must attend the two-day policy debate and that no excuses for absence will be accepted.

Meanwhile, Democrat MP Chinnaworn Boonyakiat, said his party has been allocated 63 minutes for debate and will focus on clarifying the policies it promised during the election campaign.

Government whip Wichian Chawalit said he was confident that Prayut will be able to deal with all the attacks from the opposition. “They must not play foul,” he warned.

According to schedule, debates will kick off from 9.30am and wrap up at 1am the following day.