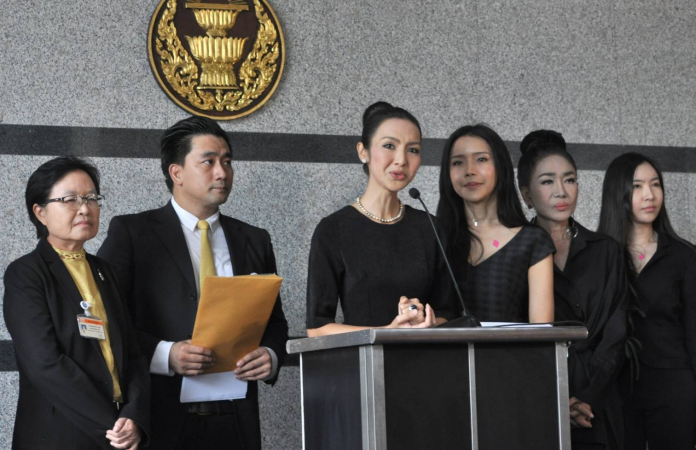 A group of transsexuals has proposed a new law that guarantees legal rights to people who undergo sex change, including a right to have their title changed to suit their new gender.

The group submitted the proposal addressed to House Speaker Chuan Leepai on Thursday.

The proposal seeks equality for men and women who undergo sex change, in terms of their name title, legal rights as married couples, marital status, military conscription and imprisonment in the correct cell based on their new sex.

The Life Inspired for Transsexuals Foundation is leading a campaign to collect at least 10,000 signatures in support of the proposed law.

Yollada Suannok, president of the Transsexual Association of Thailand, and Jern Jern Boonsoongnern, a well-known singer and leading LGBT figure, led the group to hand their letter in at TOT Auditorium, which is serving as a temporary venue for Parliament meetings.

Yollada, who is still referred to as Mr, said the proposed law will bring Thailand to a higher level of rights and freedom for LGBTQI (lesbian, gay, bisexual, transgender, queer, intersex) people.

“Let the world see that Thailand is among the leaders when it comes to the rights and freedom for LGBTQI people,” she said.

Tankhun Jitt-itsara, a member of the House speaker’s staff, accepted the letter on Chuan’s behalf, saying that the House speaker welcomed suggestions on new laws as well as complaints regarding the legislator.

He also said this new law proposed by the group would affect the lives of many transsexuals who have long been seeking legal rights to suit their new gender.