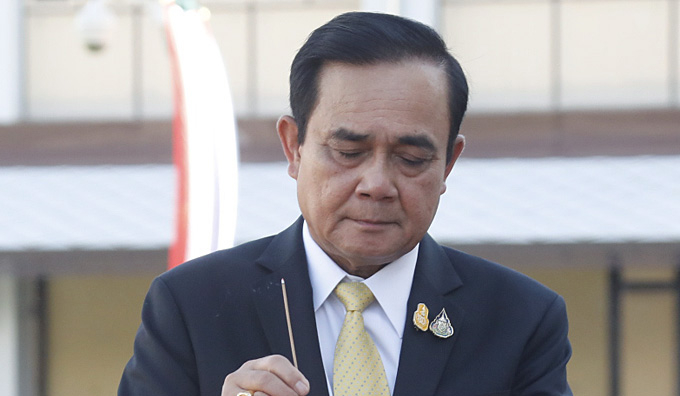 Citing concern for the health of General Prawit, Prime Minister General Prayut Chan-o-cha has announced that he will supervise the Royal Thai Police and chair the Police Commission himself.

Prayut was speaking to reporters after he officially took office as the concurrent defence minister by entering his office at the Defence Ministry.

Prayut said he would supervise the national police force and head the Police Commission in lieu of his deputy, General Prawit Wongsuwan, because he has concerns over Prawit’s health.

“I have concern for Prawit’s health. He has a very high level of determination for his other responsibilities,” Prayut said.

He said Prawit has several other responsibilities, including national intelligence and the supervision of the National Security Council.

Prayut said he would screen promotions of both senior military and police officers that were nominated by their agencies, in order to ensure suitability.

The prime minister said it was not certain whether he would also supervise the Department of Special Investigation, but he would make sure that all important tasks related to the DSI would get done.

Prayut added that the DSI would also need to be reformed, as the agency may have too many police officers working for it.

Regarding the military budget, Prayut said the military agencies may not get all of what they wanted because the government has limited money. But he insisted that the much-criticised procurement of submarines would not be cancelled.

“The purchase must be made properly. There must be a committee to check it and make it transparent – and the issue is over,” Prayut said.