The Sawang Din Daen Provincial Court on Wednesday ordered nine people who allegedly led a village protest against plans for a Chinese mining project to pay a combined Bt1.5 million in compensation to the company, a lawyer for the defence team said. Some Bt3.61 million had originally been demanded.

The villages had been fighting the plan for a potash mine in Sakhon Nakhon's Wanon Niwat district.

Lawyer Sor Rattanamanee Polkla said the court viewed that the villagers’ gathering at the entrance to China Ming Ta Potash Corporation’s exploration site to protest was a violation of the law because the company's survey team had received permission to carry out the exploration work.

As for the compensation, the court counted the salaries of engineers over the period of obstruction, from May 9-15, when they were prevented from working. Some Bt2 million was demanded as damages for the company’s inability to conduct further surveys. This demand was negotiated down to Bt450,000, leaving the total compensation for the nine defendants to pay at Bt1.5 million plus interest. 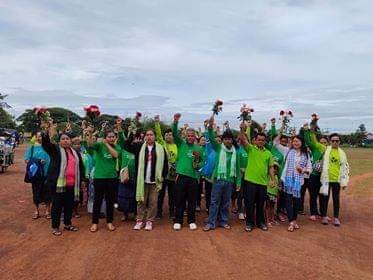 Kitthakorn said the villagers were surprised that they were ordered to pay the compensation but vowed to appeal against the ruling to a higher court. Sutta said the experience showed that the villagers needed to learn more about the law in order to fight the mining project.

Sor Rattanamanee also said there were various legal points that required this case to go to an appeal. The lawyer cited the police claim that these nine defendants were leading the protest because they were photographed as being at the protest site every day. But she said the act of photographing the villagers could suggest a form of bullying by the police in identifying them as protest leaders, rather than the police investigating their actual behaviour.

Plaintiff lawyer Watcharin Srithaporn said the court had given both sides justice based on the evidence and the parties’ behaviours. He said that the court also had the mercy to reduce the compensation that the villagers had to pay. Although the compensation was lower than that requested, the plaintiff side was generally content with the verdict, he added.