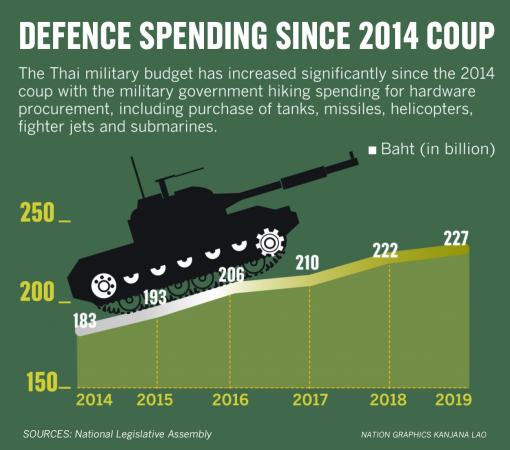 Academics are calling for a cut in military spending as the new government prepares to set the expenditure budget for fiscal 2020, while urging the administration to spend more on economic reform, education and public health.

Prayut, who is also chairman of the Council of Economic Ministers, will meet tomorrow (August 1) with representatives from Finance Ministry, Budget Bureau, National Economic and Social Development Council and the Bank of Thailand.

Prayut chaired the first Cabinet meeting on Tuesday after the new coalition government was sworn in. His priority is to push through the budget bill which is expected to be delayed by about four months from the normal starting date in October. The new government is expected to set the expenditure target at Bt3.2-3.3 trillion, running a deficit of about Bt450 billion.

The expenditure on military hardware is expected to be closely scrutinised by the opposition and the public. Over the past five years under military rule, critics had blamed the junta-backed government for the rises in military budget under the Defence Ministry, such as the purchase of Chinese-made submarines with tax-payers' money.

Somchai Sujjapongse, former permanent secretary for finance, said that military spending should be cut and more funding should be allocated in support of the low and middle income groups and education". Cyber-war is here, no need for tanks and other military hardware,” he added.

The new government should help lift people out of poverty and provide them with more opportunities in life. “ It is not just about giving money to people but to offer them a better education and wider more job opportunities,” he suggested.

The government should also reduce the number of welfare card holders which currently stands at 14.5 million, he said.

Government can gradually increase teachers' salaries as to make this professional attractive, he said. Higher wages for teachers would also help get them out of debts, strengthening their dedication to the profession, he said.

Government should adhere to fiscal discipline and refrain from over-spending on populist policies which have proven to be a waste of public fund in the long run. 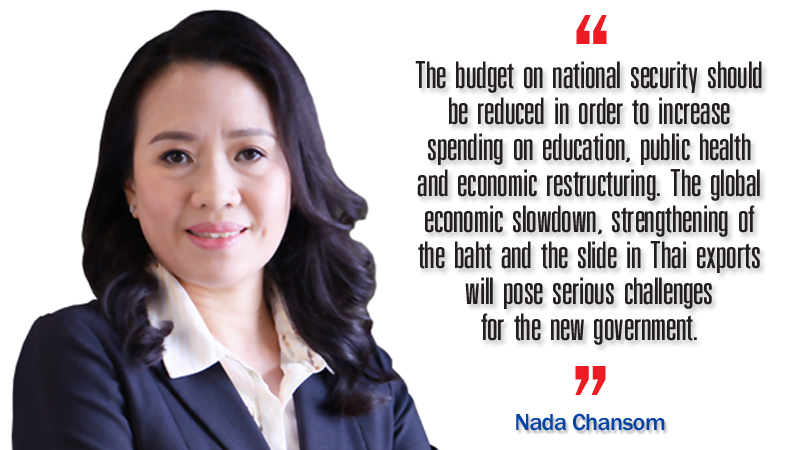 Nada Chansom, an economist at the School of Development Economics, National Institute of Development Administration NIDA, shared a similar view with Somchai, saying that the budget on national security should be reduced in order to increase spending on education, public health and economic restructuring. The global economic slowdown, strengthening of the baht and the slide in Thai exports will pose serious challenges for the new government, she said.

Government should focus on spending that would lead to industrial restructuring which in turn would draw in more private investment.

“While public spending in infrastructure will drive the economy in the short term, we need more private investment to sustain long-term growth".

Meanwhile, the Bank of Thailand reported today that overall economic activity in the second quarter of 2019 expanded moderately from the same period last year.

Merchandise exports continued to contract, consistent with the decline in manufacturing production, while the tourism sector expanded at a slower rate, mainly due to a decline in the number of Chinese tourists.

However, overall domestic demand continued to expand, albeit at a softer pace. Private consumption softened from almost all spending categories, except non-durable goods. Private investment contracted in both investment in machinery and equipment and investment in construction.

The seasonally-adjusted unemployment rate slightly decreased from the previous quarter. The current account continued to post a smaller surplus, attributed to a lower surplus in trade balance, and the deficit in services, income, and transfers balance, as a result of the seasonal remittance of profits and dividends by foreign businesses.

The capital and financial accounts registered a deficit from the assets side, according to the central bank.