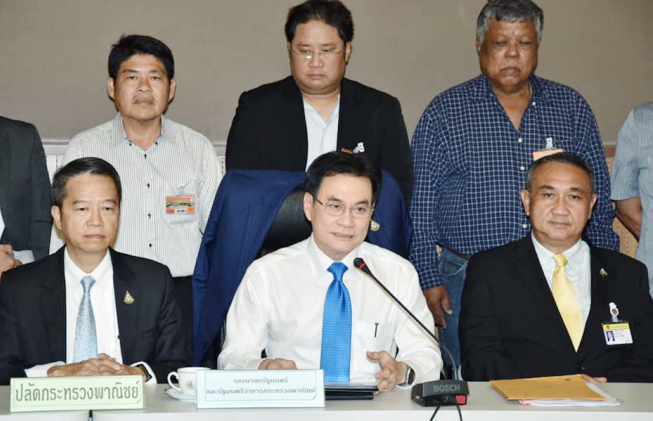 Jurin Laksanawisit, centre, Deputy Prime Minister and Commerce Minister, meets with representatives of the Commerce Ministry, the Federation of Palm Planters of Thailand and the Palm Oil Committee of the National Farmers Council on Wednesday.

A palm oil price guarantee of Bt4 per kilogram of 18 per cent of palm oil unit was finalised at a meeting between farmers’ groups and government officials, Deputy Prime Minister and Commerce Minister Jurin Laksanawisit said on Wednesday.

Jurin said the price guarantee was limited to those holding 25 rai per family as the committee will calculate the difference between the market price and the guaranteed price from time to time. They would deposit the price differential into the accounts of farmers registered with the Bank for Agriculture and Agricultural Cooperatives. Such payments will be made every three months. This means the sub committee that calculates the market price and guaranteed price will make these payments four times a year.

For example, with a market price of Bt3 per kilogram of 18 per cent of palm oil, the subcommittee will deposit the difference with farmers based on Bt1 per kilogram under a limit of 25 rai per family.

Meanwhile, the meeting also agreed to others measure to improve the livelihoods of palm oil producers in a sustainable way.

Under the first measure, B10 diesel will be promoted by representatives of the Ministry of Energy. They informed the meeting that there are guidelines for the B10 diesel to be made compulsory by switching from B7 diesel by the end of this year in order to increase the use of palm oil.

The second measure is to use the product as a fuel for electricity production, which has been approved by the Cabinet and could see the use of about 130,000 tons of palm oil. Cabinet approval will be sought for the move.

Third, in regard to the supervision of crude palm oil stocks and bleached palm oil, technology tools would be introduced to with the use of an electronic meter for greater precision.

Another measure would see strict enforcement of rules regarding the importation of palm oil and strict conditions regards to the transfer of palm oil from Thailand, especially through the Sadao checkpoint or in the South, via border crossings. Such transfers must be strictly regulated in order to prevent the introduction of palm oil claimed to be used in Thailand.

The final measure proposed by the committee is legislation for a Palm Oil Act as a means of managing the trade over the long term. The committee agreed to push for such an Act to be introduced as soon as possible, he said.