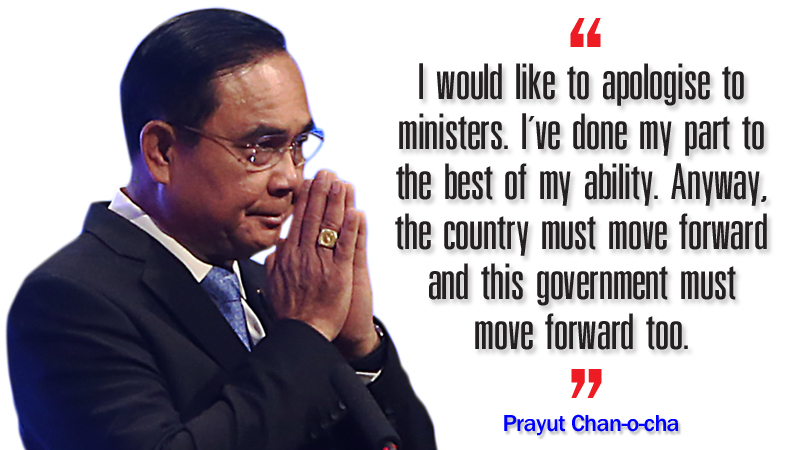 Prime Minister General Prayut Chan-o-cha on Thursday apologised to his Cabinet members for the ongoing controversy regarding his taking of the oath before taking office in what was seen as a tacit admission that he had failed to complete the wording of the oath as required by the constitution.

The controversy has been raging since before just the government policy debate, when Future Forward secretary general Piyabutr Saengkanokkul said Prayut was not constitutionally qualified to work as the prime minister because he had failed to properly take the oath of office.

Piyabutr alleged that Prayut ended his oath statement before saying he would protect the constitution.

Prayut earlier argued that he had spoken the oath correctly and and the YouTube clip presented by Piyabutr might be edited.

But when Prayut held a meeting of top executives of government agencies at the Grand Diamond Ballroom of Impact, Muang Thong Thani, he issued an apology.

“I would like to apologise to ministers. I’ve done my part to the best of my ability. Anyway, the country must move forward and this government must move forward too,” Prayut said while addressing the top permanent officials.

He said he would take all the blame for the controversy and he had only one concern – how to ensure the government could go on working.

“I take all the blame myself,” Prayut said.

“We must study how the charter has been written. No matter what, the government exists.”

He said he would not give any further interviews on this issue.

Can Prayut avert the approaching perfect storm as chief of economic team?