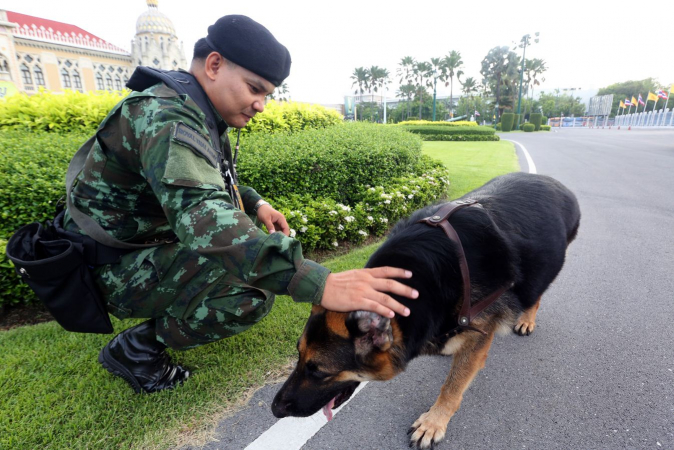 The Royal Army Veterinary Corps will auction off 15 puppies and 66 adult dogs that failed to meet the criteria for recruitment to be trained as military dogs.

The bidding will be held on August 17 at the centre in Tambon Nong Sarai in Nakhon Ratchasima’s Pak Chong district, Colonel Thavorn Ruamsuk, commander of the Military Dog Training Centre of the Army veterinary corps, said.

Thavorn denied that the dogs to be auctioned off, have been in service and are being decommissioned at their retirement age, as has been alleged by a group of dog lovers.

The group of dog lovers recently cried foul on Facebook, upset that the veterinary corps would allegedly sell retired military dogs instead of providing the best of care for them during the last days of their lives after they had served the country.

Thavorn said no decommissioned dogs will be auctioned off in this group. The dogs that to be sold on Saturday are those that failed to pass the criteria to be recruited for military dog training.

They will be four German Shepherd puppies and 11 Labrador puppies, whose starting bid prices will be Bt4,000 to Bt10,000. They are between three and eight months old and have not yet been sterilised.

He said 66 dogs with ages between 11 months and three years will also be auctioned off. All have been sterilised. They are 59 German Shepherds and seven Labradors and their starting prices will be Bt2,500 to Bt6,000.

Thavorn said these dogs were screened out during the puppy training programme. Although they are not suitable for military training, they can be best friends for members of the public, Thavorn said.

He said the veterinary corps need to sell the dogs to recoup some of the costs of caring for them and to free up accommodation for dogs in service.

Proceeds from the bidding will be credited to an Army account for use for matters related to military dog training. Part of the money will be used to take care aged dogs that have been retired from military service, he added.