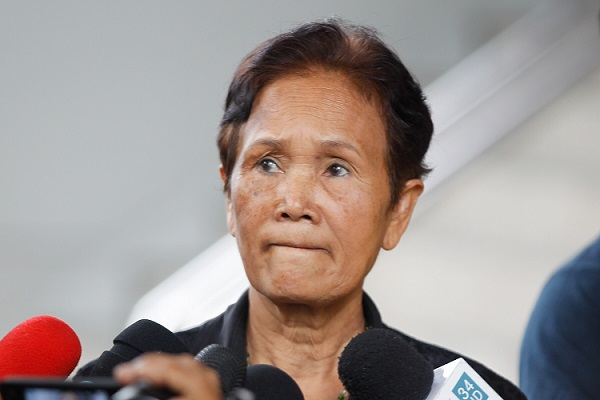 Jaroon Head, 62, tells reporters outside Ratchadapisek Court in Bangkok that she is relieved to have her name cleared of the false accusations filed against her. She was falsely accused by a friend for embezzling a Bt30-million lottery windfall in 2017. The court sentenced the accuser to 12 months in prison on Wednesday.

A 54-year-old Thai woman was sentenced to 12 months in prison without suspension for filing a false police complaint in 2017 in Udon Thani’s Ban Dung district against Jaroon Head, 62, accusing her of embezzling Bt30-million in lottery winnings.

The defendant Rewadee “Auntie Tin” Hakaew’s original sentence of one year and six months in jail was reduced by a third due to her useful testimony, though she has been required to place a bail guarantee of Bt100,000 pending appeal in a higher court.

The lawsuit stated that Rewadee had filed a police complaint with Dong Yen Police Station against Jaroon for allegedly embezzling the winnings from five lottery tickets that they had bought together. The lottery tickets were allegedly placed in Jaroon’s care, and Rewadee claimed Jaroon refused to pay her half of the Bt30 million winnings that were paid out on April 1, 2017.

However, police investigation revealed that Rewadee’s complaint was false as the two had not bought any lottery tickets and had won no prize money. Rewadee was then charged with wasting police officers’ time and causing damages to Jaroon by filing a false police complaint against her.

This is not the only court case faced by Rewadee. She faces another lawsuit for filing similar charges at Bangkok’s Prawet Police Station against another friend, Sudarat Noinit, 53, for also allegedly stealing five lottery tickets that apparently won Bt30 million in April 2016. These charges were filed by Rewadee and her friend Wilaiporn Ratanatisroy, 60, and a primary court verdict on this case is scheduled to be delivered on September 30.