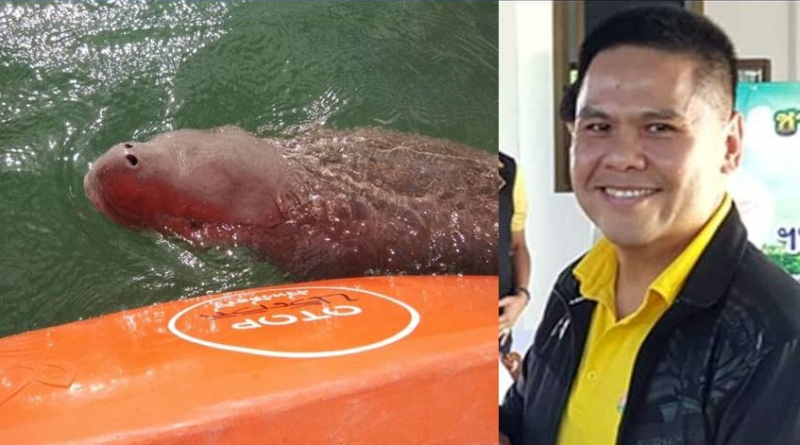 The orphaned baby dugong Mariam has been moved to a temporary nursery pond in Trang province where she is being monitored round the clock, with her heartbeat and respiratory system being checked hourly, Koh Libong Wildlife Sanctuary chief Chaiyapruek Weerawong said.

Mariam was moved to the 7-metre-radius pond in the Duyong Bay area on August 14, and a blood sample was taken for lab tests at the Rajamangala University of Technology’s Nakhon Si Thammarat campus, so she can be provided with the correct treatment. Veterinarians reported that Mariam was calm and in a stable condition with a heart rate of 85 beats per minute and three breaths every five minutes.

The baby dugong was moved because it had gone into shock – refusing milk and consuming very little seagrass – after being chased by a male dugong looking to mate during low tide on August 7.

On August 10, Mariam suffered a cardiac arrest, prompting veterinarians to give her a cardiac stimulant, and was later found to have a blood infection.

Meanwhile, Natural Resources Minister Warawuth Silpa-archa said people should not worry about Mariam as she is now in good hands, and that veterinarians and caretakers are dedicated to ensure her speedy recovery.

Noting that many dugongs were swept ashore lately, Warawuth said a national plan for the protection of these animals was being considered, adding that it would require participation from coastal residents and fishermen for peaceful co-existence with Thailand’s 250 dugongs.