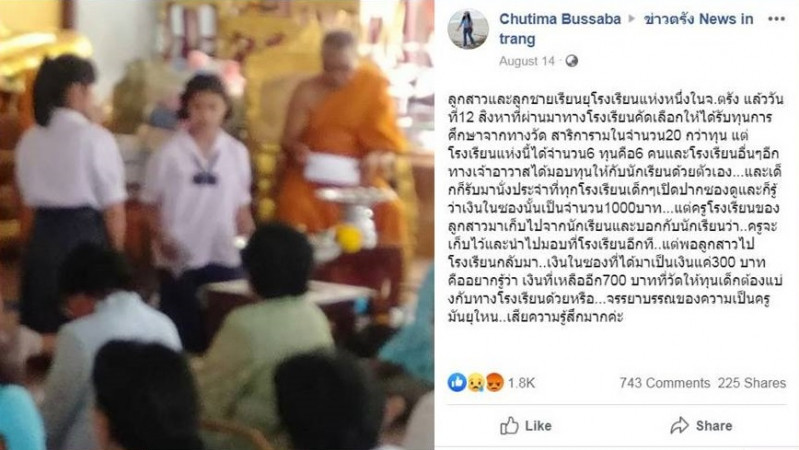 A private school in the southern province of Trang was accused of pocketing 70 per cent of the scholarship money its six students received from a temple in a National Mother’s Day event.

Reportedly fed up with this trend of “collecting commission”, which has reportedly happened many times before, a Facebook user going by the name Chutima Bussba posted a message saying that her daughter and the five other students who received scholarship money from Wat Sakikaram were told to leave their envelopes with their teacher and collect it the following day. She added that the money in the envelope was reduced from Bt1,000 to Bt300 when they collected it the following day.
“Why do pupils have to split the money with the school? Where is its conscience and ethics? I’m disappointed,” the mother, whose two children study at the same school, said.
Her post received 1,800 reactions and more than 700 comments.
Chutima, 39, told The Nation on August 16 that she had previously heard about this school helping itself to children’s scholarship money every year, and was wondering if it will do the same again this year – the first time her own daughter got rewarded.
When she noticed the teacher collecting the envelopes from the students, she said she went over to ask a monk if the money had to be split with the school, but the teacher intervened and told her to be patient and see how much money the principal gives students the following day.
Chutima also noted that students from other schools did not have to give their envelopes to their teacher.
Enraged after receiving just Bt300 the following day, Chutima said she had to speak up for justice.
“I don’t want that Bt700 back. I’m speaking up for justice because it is not right to take student’s money away,” she said, adding that other parents quoted the principal as saying that the money deducted from the scholarship will be spent on making merit.
Preecha Sohhap, 61, a resident in Trang’s Muang district, said his granddaughter – who studied at the school in question but moved to another after completing primary school – had the same experience last year.
He said the girl had received Bt1,000 from the temple, but the teacher kept the envelope and when it was returned to her days later (due to the school break), the contents had shrunk to Bt300.
He said he wanted to initially file a complaint but then decided to drop it. “I just felt sad to see the children’s joy in receiving the scholarship being turned to disappointment,” he said, adding that he was pleased that Chutima has blown the whistle as such things should not happen.