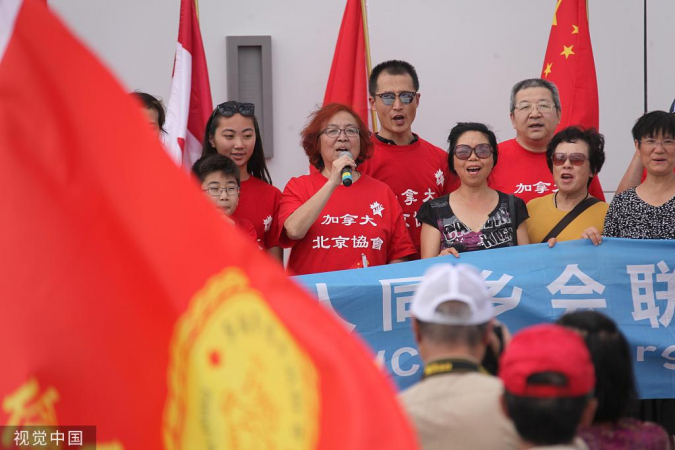 Overseas Chinese communities in the Greater Toronto Area hold a peaceful rally calling for an end to the violence that has gripped China's Hong Kong Special Administrative Region in recent weeks, Aug 11, 2019. [Photo/VCG]

Overseas Chinese in Europe have rallied against the recent violence in Hong Kong. In London, hundreds of people gathered on Trafalgar Square during the weekend, protesting against the ongoing Hong Kong unrest. In Paris, and German cities of Berlin, Cologne, and Hamburg, overseas Chinese have also held peaceful rallies against the violence.

Overseas Chinese and students in Britain sang the Chinese national anthem and chanted "no violence" and "one nation, one China".

He said they came here to express their support of Hong Kong and Hong Kong police and their objection to separatists.

SYDNEY - Around 3,000 people marched peacefully through the streets of Sydney on Saturday to call for an end to the violence which has gripped China's Hong Kong Special Administrative Region (SAR) in recent weeks.

Mobilized through social media, the Stop Riots in Hong Kong rally was predominantly made up of Chinese students living Down Under. However, there was also a large number of local supporters in attendance as well.

Radical protesters in Hong Kong have abandoned their peaceful protests and unfortunately some of them have turned into violent mobs who smashed the parliament, ransacked the police stations and threw bricks and petrol bombs on the streets, Tony Jiang said.

"We support and we understand peaceful protest, but we believe it has grown into an out-of-control situation."

To show their solidarity with law enforcement officers in Hong Kong, many at Saturday's rally held up signs with messages of support for police.

Around 1,000 people from overseas Chinese communities in the Greater Toronto Area on last Sunday held a peaceful rally protesting against the violence that has gripped China's Hong Kong Special Administrative Region.

Among banners that said "Protect Hong Kong, fight against violence," One of the group's leader Tony Jiang, who is an Australia citizen of Chinese descent, told Xinhua "We came here to stand against the violent riots and the decaying law and order in Hong Kong."