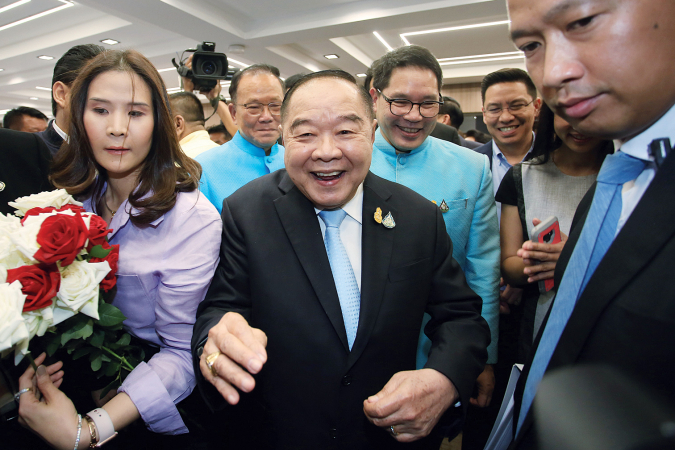 The coalition government may stay in power for only two years as it will be shaken by economic woes and questions of its legitimacy, academics warn.

Deputy Prime Minister General Prawit Wongsuwan was recently made chief strategist of the coalition leader Phalang Pracharat Party, and Ubon Ratchathani University’s Faculty of Political Science dean Titipol Phakdeewanich said that this move only reinforced people’s perception that the coalition is supported and controlled by the military, which staged a coup in 2014.

“Military intervention in politics is never good for democracy,” Titipol said, adding that the public realised that the junta intended to stay in power after the March election when the Phalang Pracharat Party endorsed General Prayut Chan-o-cha as prime minister. Prayut was the leader of the coup and head of the junta-backed government.

He also said that Prawit and Phalang Pracharat will continue trying to lure opposition MPs to join their camp because the coalition has a slim majority in the House of Representatives.

Titipol added that it was also time for Prayut to fix his mistake after he was accused of not reading the entire oath in the oath-taking ceremony before taking office.

“Prayut doesn’t need to resign, and nor will the government collapse. Former US president Barack Obama had to be sworn in again after he made a similar mistake in 2009, when he took office for the first term,” Titipol said.

Somjai Phagaphasvivat, another political scientist, said Prawit’s power and Prayut’s charisma will help them manage fighting political factions in the Phalang Pracharat Party. These two men also have the capacity to steer the entire coalition government.

“They will, however, face two challenges – the economy and their legitimacy to rule,” Somjai said.

Thai and global economies are slowing down very fast, so Prayut will face the huge task of managing the economy and ensuring the people are satisfied, he said, adding that failure to deliver will land the PM and his Cabinet in unstable waters.

On the political side, Prayut’s government also has to address the question of validity, he said, as the coalition has been accused of representing military rule, much like the junta-led government from 2014 to 2019.

The government also has to prove that it abides by freedom of expression, which is at the heart of democracy, he said.

“So far, the coalition has done nothing to show it is upholding the principles of freedom of expression, nor has it managed the economy well,” Somjai said.

As for the controversy over the oath, Somjai said the Constitutional Court will have a final say.

Meanwhile, Gothom Arya, adviser to Mahidol University’s Institute of Human Rights and Peace Studies, said he reckons the government will stay in office for two years because the politicians are not ready for another election.

“Some may believe this government will stay for the entire four-year term because it has the military’s support, but I believe the political situation will remain unstable because of frequent military intervention,” he said, adding that after two years the political landscape is bound to become turbulent, especially since the coalition is comprised of many tiny parties.

He also called for freedom of expression to be restored, especially since Thailand has a civilian government. Gothom also agreed that the premier should take his oath again, “otherwise Prayut’s reputation will be tarnished forever”.