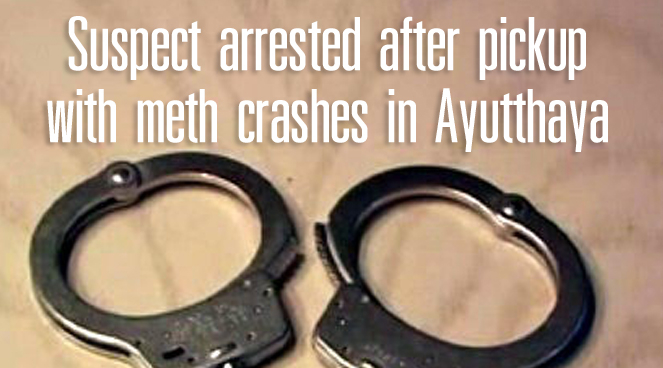 A suspect was arrested after his pickup truck slammed a highway guard rail and fell onto a roadside in Ayutthaya’s Bang Pahan district on Thursday morning, police said.

The Bang Pahan police station was alerted at 6.30am of the accident on the outbound Asia Highway in Tambon Kwanmuang.

A trailer truck driver, Uthai Jitmun, 40, spotted the pickup lying beside the highway and called police. Uthai stopped his truck to try to help any injured person but he found no one in the pickup.

When police arrived at the scene, they found about 160,000 methamphetamine pills and five kilogrammes of crystal meth in the pickup and strewn on the ground around it.

Police were later informed that an injured man was seeking help on another side of the highway. He was identified as Wutthipong Kwankaew, 38. He was rushed to Bang Pahan Hospital and was put under police watch before he would face charges of drug trafficking, according to the police.