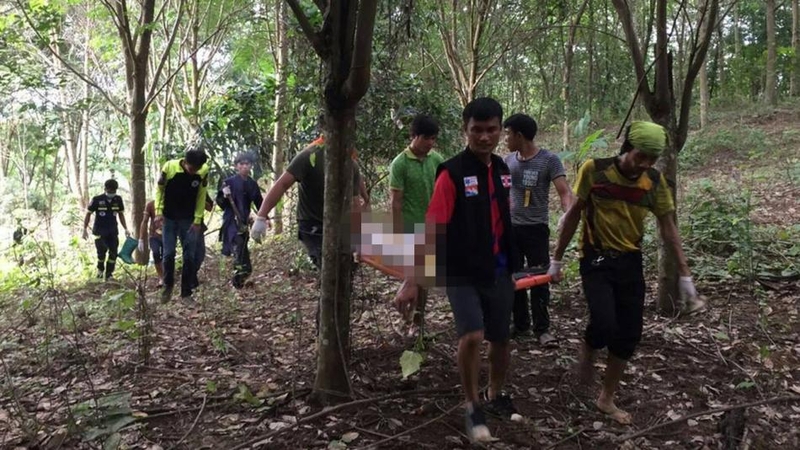 Two men from Laos working as rubber tree tappers in Udon Thani were found dead in a forest where they had gone to hunt wild boars, police said.

The Nam Soam police station in Udon Thani’s Nam Soam district was alerted at 5pm Thursday that the bodies of two men had been discovered in a forested valley bordering Loei’s Pak Chom district. Both had been shot.

Officials had to walk about five kilometres to retrieve the bodies of Luang Prabang residents Boon Kaewwilai, 24 and Ken Wilanee, 25. Ken had a gun wound on the left of his head while Boon was shot above the right eye and in his left hand with pellets from a homemade shotgun. The bodies were found lying near each other.

Villagers told police that the two were friends from Laos who had come to work in Thailand milking rubber trees and they often went into the forest to hunt for wild boar. The two had gone off on Tuesday and when they didn’t return, villagers went to look for them and found the bodies Thursday afternoon.

Police suspect that the two, who each had a homemade shotgun, separated to look for wild boars and one of them shot the other thinking the movement he had heard was a boar. When he discovered he had shot his friend, he turned the gun on himself. However, murder has not been ruled out and the bodies have been sent to Srinakharin Hospital for autopsy. Police will contact the Lao Embassy to arrange repatriation of the bodies.