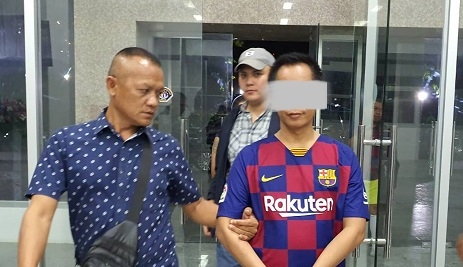 Police have apprehended the 48-year-old Phichit businessman Mana “Wizard of Cryptocurrencies” Jumuang over his alleged roles in a reported digital currency scam that caused damages of Bt500 million and affected thousands of Thais and others in 10 Asian countries.

Mana’s six accomplices will be sought at a later date.

Mana, who maintained he was innocent, was sent to face the prosecution in Phichit, where the gang's operations are based. It was reported that his two Thai accomplices remained in the country while four Vietnamese accomplices had fled the country.

Crime Suppression Division superintendent Pol Colonel Man Menyaem on Wednesday evening led officers to a football field in Bangkok's Rama 9 area to arrest Mana on the charge of conspiracy to commit fraud under warrants issued for Mana and six others.

A police investigation found that Mana along with two Thai and four Vietnamese accomplices had allegedly duped Thais and foreigners in 10 Asian countries into investing in cryptocurrencies such as Onecoin, Bitcoin, Ripple and Ethereum during 2018-2019.

Mana claimed to be an expert with the alias “Wizard of Cryptocurrencies”, and invited people to invest their money in cryptocurrencies that he claimed would yield a 400 per cent rate of return within 200 days, police allege. The gang also allegedly invited people to invest in Onecoin – which the Bank of Thailand has warned people to shun as it is not recognised as money to be used for payments under Thai law. Other countries also do not certify Onecoin as legal tender to be used as a medium for legal debt repayment. The gang claimed that people could collect and exchange Onecoin units for other assets such as gold, cars, or houses or to earn high-rate dividends, police said.

Many people had invested and at first received dividends, but became suspicious of fraud when they could not exchange them for any assets as promised. When they were unable to contact the gang, victims gathered to file complaints to police in respective areas, resulting in the arrest warrants.

Besides seeking the six at-large accomplices, police say they will also proceed to seize plots of land that the gang had bought in Phichit over suspicion they were purchased by ill-gotten money.