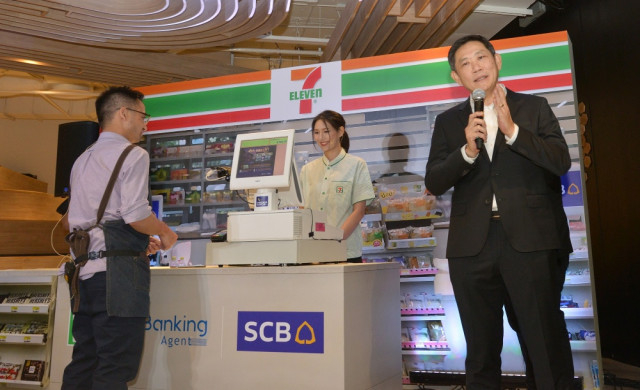 Commercial banks are going ahead with using convenience stores as agents after achieving up to 25 per cent growth monthly via 3 million transactions and Bt16 billion worth of deposits.

Preedee further elaborated that transactions via banking agents has risen exponentially since May, when the bank first started collaborating with 7-Eleven, Thailand’s largest convenience store chain.

“In May we only saw 300,000 transactions via banking agents, before it doubled in June, hit 900,000 in July and eventually 1.2 million transactions in August," he said.

The executive director added that the reason behind this is the convenience of being able to complete transactions any time of the day or night. “Their 24/7 availability fulfills the needs of street merchants, who usually deposit their earnings after markets close at night,” he said.

Aphiphan Jaroen-Anusorn, general manager at Siam Commercial Bank, said the bank has more than 20,000 agents offering "SCB Service" via a collaboration with 7-Eleven, Thailand Post, Tesco Lotus and The Mall.

Phayong Sriwanich, general manager at Krungthai Bank, said that though pushing for transactions via banking agents is not part of the bank's main agenda, Krungthai may eventually follow this trend in the future to offer its clients a wider scope of services.

“Unlike other commercial banks, most of our branches are upcountry,” he said. “If having banking agents helps us extend our services to remote areas, it will benefit both clients and the bank. This way transactions can be completed any time of the day or night and we will not have to open a new branch."

“Krungthai is now talking with private operators who can offer 24/7 services, and hopefully we will see more channels of KTB very soon.”