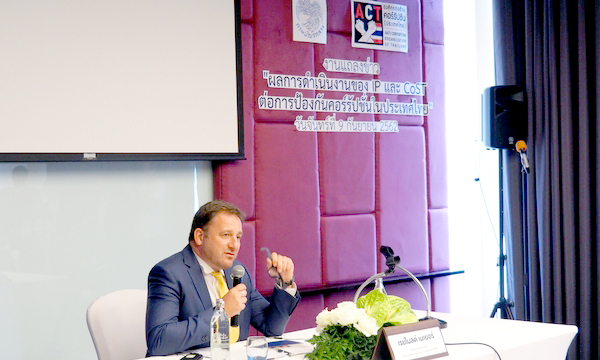 Renaud Meyer, resident chief of the United Nations Development Programme (UNDP), is calling on all Thai lawmakers to help fight corruption. Praising Thailand’s efforts so far, he noted that some issues need to be addressed since certain influential figures and groups with vested interests still pose obstacles when it comes to building a less-corrupt society.

Meyer made this comment during a regional conference on Monday (September 9) on the result of anti-corruption efforts over the past five years.

The Anti-Corruption Organisation of Thailand (ACT) collaborated with UNDP and the United Nations Office on Drugs and Crimes (UNODC) to hold a two-day regional forum under the topic, "Increasing Transparency and Integrity in Public Procurement in the Context of the SDGs”, which kicked off on September 9.

Mana Nimitmongkol, ACT’s secretary-general, agreed with Meyer and told The Nation that Thai politicians have yet to actively participate in the fight against graft. In fact, he said, very few political parties had the battle against corruption on their agenda when campaigning for votes during the March election.

The organisation also reported the result of five experiments in Thailand using integrity pact (IP) and Construction Sector Transparency Initiative (CoST) – tools that are used globally to detect corruption – and claimed that these tools helped save about Bt100 billion in government budget. The tools help monitor suspicious behaviour and enable people to actively prevent corruption in government agencies.

Yanee Sangsrichun, adviser to the Fiscal and Financial System Development at the Comptroller General’s Department, said the government was cooperating with civil organisations and has adopted IP for procurement projects that are worth more than Bt1 billion and CoST for projects worth less than Bt1 billion. These tools have been implemented since 2015.

She said, so far, the country has saved Bt83.1 billion, of which IP projects have contributed Bt74.8 billion and CoST Bt8.3 billion.

Vichai Assarasakorn, vice chairman of ACT, which has helped improve and develop IP and CoST, said the aim is not just about cutting down on procurement costs. It is a social collaboration between the government and the private sector as well as civil society, he said, adding that public participation in government procurement projects bring good governance. He said savings from this system is expected to hit Bt142.8 billion by the end of this year.

Mana, however, put the corruption to inconsistent government policies.

“The government and its agencies do what they want to do. For instance, public-private partnership [PPP] projects or large concessions such as duty-free licensing, are not under the IP initiative,” he said.

He also noted that influential figures or groups with vested interests were still able to make deals that have irregularities.

“In order to substantially eliminate corruption, all large public procurement projects should come under IP scrutiny,” he added.