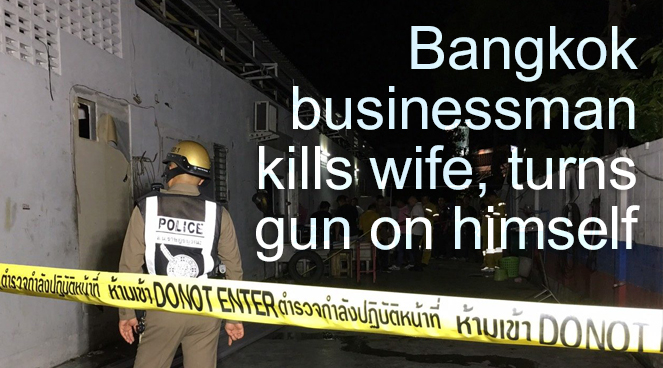 A garage owner in Bangkok's Ratburana district allegedly shot and killed his wife before turning the gun on himself Tuesday evening, police said.

The Ratburana police station was alerted of the incident which took place in the couple’s living quarters in front of Phraram 2 Auto Gas and Service shop on Soi Suksawd 46 at 6pm.

Police rushed to the scene and found the body of Romrawin Kaewkamnerd, 39, lying face down on a plastic bag with clothes inside. She had a bullet wound at the back her head.

The body of Dusit Pibulsawat, 41, was lying near that of his wife. He died from a single shot to his right temple. An 11mm pistol was in his right hand.

The bodies were sent to the Siriraj Hopsital for autopsy.

Neighbours told police that the couple had been quarrelling for several days and had a massive row on Tuesday evening before the two shots were heard. They ran to check and found the bodies so they called police.

Dusit’s close friend, Thaweewong Laicharoen, 42, told police that Dusit had been complaining of financial difficulties due to a slowdown in his business that had led to conflict with his wife.