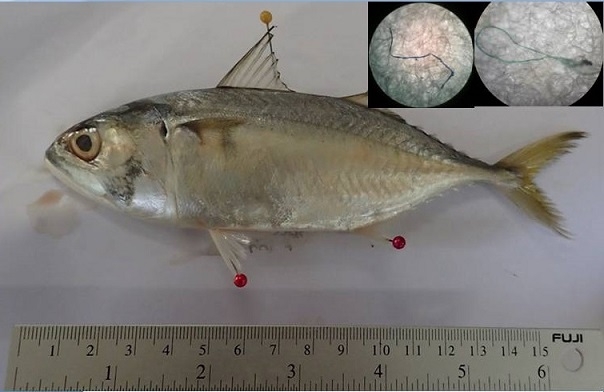 The discovery of microplastics in the stomachs of mackerel caught in Trang Sea have raised concerns, but the 3rd Marine National Park Operation Centre urged Thais on Wednesday to refrain from panicking and shunning mackerel.

The centre urged people to instead get full awareness of the problem and join in tackling the sea garbage crisis.

Thai social media had widely shared and discussed the centre’s discovery of an estimated 78 pieces of microplastic on average in the stomachs of mackerel caught from Hat Chao Mai Beach.

Research assistant Saowalak Khaosaeng, 30, said the study stemmed from the centre's daily collection of garbage at sea to separate for types and weight to monitor the quantity of sea waste.

Realising that the garbage may have an impact on the food chain in the sea off Hat Chao Mai beach, which is the habitat of a large number of affordable commercial fish, the researchers in the past few months took 60 mackerel from fishermen and conducted lab tests on the stomachs of the fish, she said. They found that each mackerel's stomach contained approximately 78 pieces of microplastic invisible to the naked eye -- each 1 millimetre to 5mm -- as the salty seawater broke down the larger plastic garbage into microplastics. The mackerel mistook these tiny pieces for food and ate them, Saowalak explained.

The study did not cover the physical impact on the fish or the origin of such microplastics but aimed to raise public awareness about the state of the current ecosystem and encourage people to apply appropriate garbage disposal methods, she added.

Meanwhile, fresh fish shops at the Nakhon Trang Municipality Market on Wednesday were still buzzing with shoppers in the morning. Mackerel seller Atchara Lomkhong, 53, said she had heard about the discovery of microplastics in the stomachs of mackerel but she was yet to see any impact on her daily sales of mackerel at Bt120 per kilogram. She said this development was an urgent reminder for all to refrain from discarding plastic waste into rivers and seas.

Regular shopper Kornwan Thatchamongkol, 37, said she felt a bit wary after the discovery because she and her family ate a lot of mackerel every week. While saying she would continue to consume mackerel, she urged people not to dispose plastic garbage into the river and sea as they could create pollution.