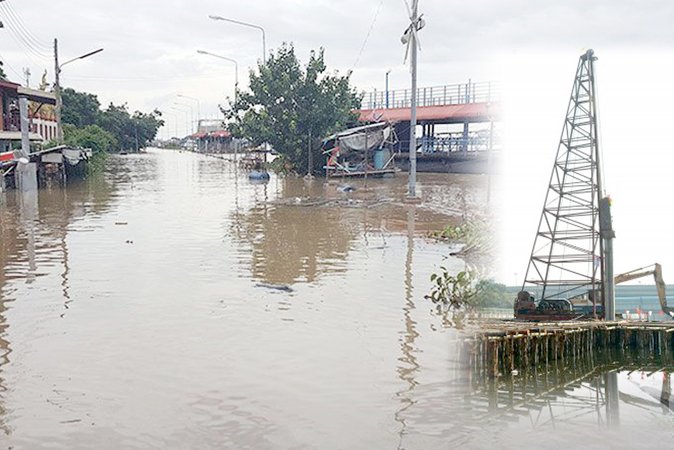 The Office of Natural Water Resources (ONWR) has given the greenlight to three new anti-flood projects worth Bt18 billion and is also preparing a Bt310-billion water plan for 2020 to be presented to the Cabinet.

Somkiat Prajamwong, secretary of ONWR, said the projects were approved at an ONWR committee meeting on September 12, which was chaired by Deputy Prime Minister General Prawit Wongsuwan. The details will be forwarded to the Cabinet for final approval.

The first anti-flood project from the Regional Waterworks Authority, which includes six sub-projects, will cost Bt11 billion and is expected to boost water supply in the Thon Buri area by 332,400 cubic metres per day.

The second involves a five-year project to boost the efficiency of drainage with the construction of the Phraya Rachmontree Canal from Phasi Charoen to Sanam Chai canals. This project will cost Bt6.13 billion and will help prevent flooding in Bangkok.

The third project will boost the efficiency of the Royal Irrigation Department’s D1 drainage canal to ease flooding in the lower Phetchaburi basin.

The ONWR committee also considered 57,975 other projects worth Bt310 billion under the 2020 Water Resources Management master plan, which will be implemented nationwide.

It also acknowledged the progress of 2019 water-management projects that cost the government Bt19 billion.

Somkiat added that it will take about 20 days to drain the floods in Ubon Ratchathani with the use of water pumps.

“People should be able to return to their homes by September 27 as the river’s level should lower by September 20,” he said. “But that doesn’t mean all the water will be gone, as part of it will be redirected to dams or natural reservoirs.”