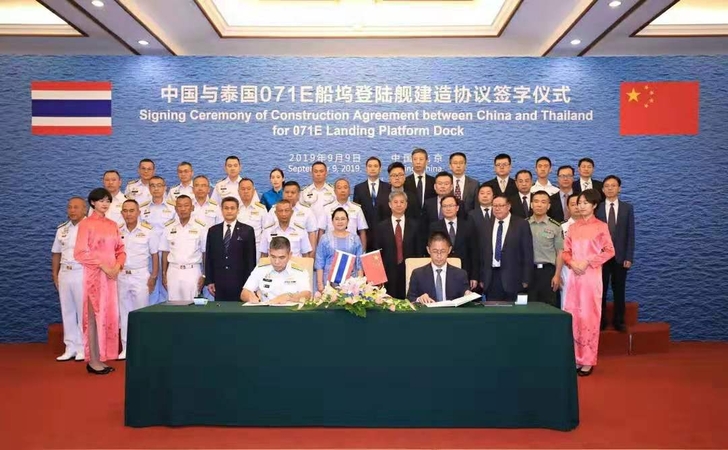 China will build a Type 071E amphibious transport dock ship for export to Thailand, the largest naval ship the nation will have built for a foreign user.

China State Shipbuilding Corp, a State-owned shipbuilding conglomerate and one of the major suppliers to the Chinese Navy, said last week it had inked an agreement with the Royal Thai Navy on the construction and sale of the Type 071E, adding it was the first time China had sold such a vessel to another country.

Admiral Luechai Ruddit, commander-in-chief of the RTN, and officials from the Chinese government and military took part in a signing ceremony for the deal in Beijing on Sept 9, according to a statement issued by CSSC.

The company said the deal was a major new accomplishment in the strategic cooperation between the two countries, adding it would substantially deepen collaboration in the arms trade and also help strengthen regional peace and stability.

The shipbuilder did not provide details about the ship's specifications, or its construction and delivery schedule.

The Type 071E is an export version of the Type 071 landing platform dock deployed by the People's Liberation Army Navy. There are six Type 071s in service with the PLA Navy, according to military observers following the Navy's weapons development.

According to information from CSSC, the Type 071 is China's largest landing craft and boasts advanced weapons systems. It is 210 meters long and 28 meters wide, and has a full-load displacement of 25,000 metric tons. The vessel is capable of sailing more than 18,500 kilometers in a single operation, the company said.

An insider in China's naval shipbuilding industry, who wished to be identified only as Che, said that compared with the existing Type 071 vessels in the PLA Navy, the export version features better weapons and can carry more helicopters.

The Type 071E amphibious transport dock ship, also classified as a type of landing platform dock, will be the largest naval warship China has built for a foreign country.

After the ship is delivered to the RTN, it will also become the biggest warship in the Southeast Asian nation's fleet, eclipsing HTMS Chakri Naruebet, the flagship of the RTN and its only aircraft carrier.

The largest naval ship China has exported so far is HTMS Similan, a Type 908 replenishment ship built for the RTN in the 1990s that has a full-load displacement of 22,000 tons. That makes it bigger than HTMS Chakri Naruebet, but it is not classified as a warship.