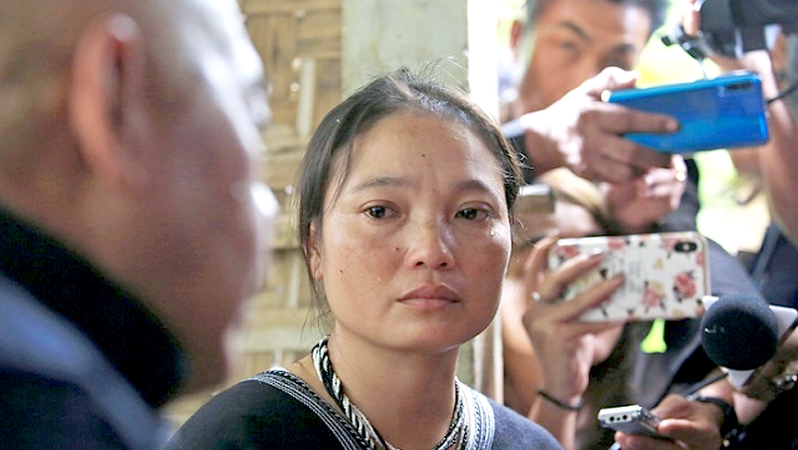 Deputy chief of the Department of Special Investigation (DSI) confirmed on Monday (September 16) that his agency was working hard to gather evidence in the disappearance-turned-murder of Karen activist Porlajee “Billy” Rakchongcharoen at the Kaeng Krachan National Park in Phetchaburi province.

Pol Lt-Colonel Korrawat Panprapakorn told a seminar, organised by Pathum Thani-based Rangsit University’s College of Social Innovation, that DSI investigators needed some time to work on the case before it can issue any summonses or arrest warrants.

“I can guarantee this will not be a case of ‘match-fixing to fool the audience’. The result of the investigation will depend entirely on the evidence available,” he said.

Meanwhile, Billy’s widow Pinnapa Prueksaphan said that since April 17, 2014, when her husband went missing, she has been lodging complaints with many agencies in vain and had started believing that there was no justice.

Pinnapa's complaint against park officials led to investigations that did not make much progress, until the DSI accepted the case and found evidence confirming Billy’s death. Human bones were found in and around a 200-litre oil drum submerged near a bridge leading to Kaeng Krachan Dam in late April this year.

“I would like to see law enforcers do their duty and refrain from bullying those in a disadvantaged position. You arrested Billy, but instead of sending him for prosecution, you made him disappear – that is thug’s law. I want to say that we are all humans too, no matter which tribe we belong to. We in Thailand are all the same, so we should learn to coexist with love and understanding. I don’t want law enforcers to let power get to their heads. I want us all to be equal,” she said.

Meanwhile, Public Sector Anti-Corruption Commission (PACC) investigator Chonsawat Prasatkharukan said his agency was looking into why former Kaeng Krachan park chief Chaiwat Limlikit-aksorn and other park officials did not have Billy arrested for allegedly collecting wild honey from the forest, as there is no record of his arrest and release. He said Chaiwat and the other officials were being investigated for charges related to wrongfully exercising or failing to exercise their duties – not for the murder or disappearance charges.

However, he said, since this investigation is related to Billy’s disappearance and murder, the PACC has sent its probe results to the National Anti-Corruption Commission, which will later forward all findings linked to all possible charges to the DSI.

Chonsawat also said the PACC will soon set up a fact-finding sub-committee to further look into alleged corruption in the Kaeng Krachan National Park reforestation project, while a separate investigation into the 2011 burning of homes and rice barns of Karen indigenous forest dwellers will be completed in three months.

Lawyer Saengchai Rattanaseriwong from the Human Rights Lawyers Association said Billy had been gathering evidence to fight the case of forced eviction and burning of the homes of some 100 Karen families before he was detained for questioning over the alleged illegal collection of honey. Saengchai said Billy was planning to present the evidence to the Palace for consideration.

He noted that though Pinnapa’s appeal for Billy’s release had gone through three courts, eventually to be dismissed by the Supreme Court, people should not believe the officials’ claim that they had released the activist. He said the Supreme Court had only dismissed the appeal because the family’s witnesses were unable to convince the court that Billy had been detained.

“Now the evidence that the DSI has uncovered is not ‘unconvincing’ circumstantial evidence like before and these may be linked to the abuse of power, forced disappearance and murder,” he added.