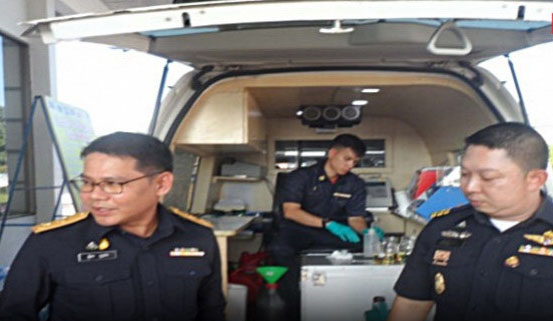 Police and Excise Department officials Monday raided a petrol station in Mukdahan’s Muang district and discovered it was selling some 4,000 litres of a type of biodiesel that is allowed for export only.

Police and excise officials checked the biodiesel at the station at 3pm following complaints that it was selling substandard biodiesel.

The officials took a sample of the biodiesel from the station’s underground storage to test in a mobile lab and found that it contained 8.2 per cent of methyl esters.

The Excise Department allows biodiesel with no more than 6.7 per cent of methyl esters to be sold in the country. Fuels with higher methyl esters are for export only.

The station owner was charged with smuggling oil meant for export to sell in his station without paying excise tax. He was fined Bt160,000 and the oil was seized.