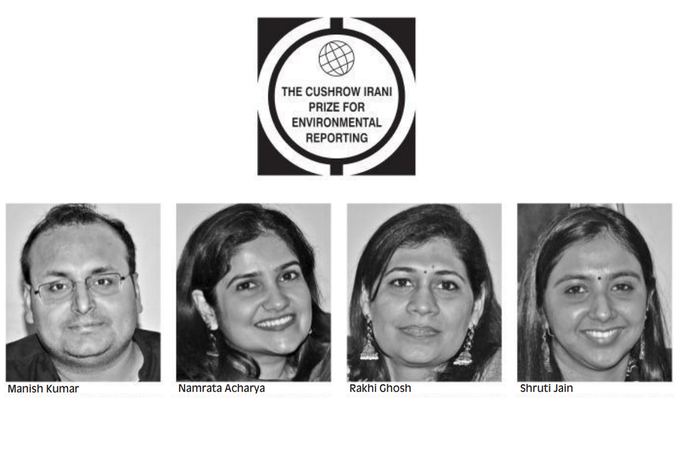 Four journalists, who extensively covered the problems afflicting rural India and environmental issues over the past year, were honoured with The Statesman Rural Reporting Awards 2018 on Monday night.

The third prize was awarded to Manish Kumar, a freelance journalist writing for The First Post, and finally the recipient of the Cushrow Irani Prize for Environmental Reporting was, Namrata Acharya, assistant editor, Business Standard.

Rakhi Ghosh, has meticulously documented the plight of students in Odisha’s tribal and Dalit -dominated Rayagada and Kandhamal districts where around 211 government-run primary schools have been shut down, depriving the students of their basic right to education.

In an interview with The Statesman and speaking on the issue, she said, “It is a tragic affair that students are not being able to receive basic education at the primary level where it is compulsory. The cause for the shutdown of the government-run primary schools has been attributed by the state government authorities to lack of students. On the contrary, it is the lack of teachers and their low attendance which has led to parents admitting their students in the residential schools instead.”

Her reportage documents the government’s effort to close the one and only school in a village in Rayagada district that was established in 1979 and was providing education to Khalapadar village children.

The village comprises 30 households including tribal and Dalit families, with most children dependent on the primary school for their education. She further noted that the process of closure of the school system in Odisha’s tribal districts dates back to 2014 when the state government put up a notice announcing the closure of all state primary schools with less than five students.

Ghosh remarked how unfair it was to deprive the students from their right to basic education by not addressing the problem of low attendance of teachers which is a root cause for students leaving the primary schools.

The authorities, however, have chosen to conveniently shift the blame on the students, citing that numbers of teachers in the schools are adequate. She highlighted, “ The government-run primary schools are not just the ray of hope for these students in terms of education but also in terms of nutrition, which come from the mid-day meals provided at these schools.

If the teachers don’t come to school, the students are deprived of their mid-day meal.” In general, the residents of these villages get rice and onion at subsidised price which then is consumed with locally made pickle but in the mid-day meals, the students get rice, dal and vegetables which give them proper nutrition, she added. Commenting on the migration of students to residential schools since the government- run primary schools are being shut down, she pointed out that in Rayagada district there are a number of 100- seat residential schools for tribal students.

She, however, noted in her reportage that all is not lost since after understanding the ground reality, the Odisha Primary Education Programme Authority has now taken steps to reopen schools in inaccessible and vulnerable areas regardless of the number of students who attend them.

The winner of the second prize, Ms. Shruti Jain, highlighted the despair of farmers in the drought-prone region of Rajasthan’s Hanumangarh district and how the reason for their sufferings are direct causes of institutional failure.

She empirically examined how the Kisan Credit Card and Pradhan Mantri Fasal Bima Yojana are well-intentioned schemes but are barely serving the purpose. The apparent excesses committed by the banks, in this reportage, the State Bank of India, include overcharging of interest on farm loans and failure to pay debited premiums to the insurance company.

But these allegations were instantly brushed off by the bank managers who attributed these “lapses” to “software issues” or “overworked employees.” The question that surfaces from this plight is, whether it’s a mistake or malice? Jain documented that in February 2018, farmers of Chhani Bari village in Hanumangarh district of Rajasthan, staged a protest in front of the local State Bank of India branch against the extra interest charged on their Kisan Credit Card loans. After 58 days of protests, interest of approximately ` 16,52,000 was reversed in 350 KCC accounts.However, the bank concerned is yet to pay their reparations to thousands of farmers which amount to a minimum of 50 lakhs, from three of the bank’s branches.

In an interview to The Statesman, she recalled how the district president of the All India Kisan Sabha told her that the bank authorities thought that the villagers are illiterate so it was easy to fool them and questioned that if there was not a shred of truth in their protests, then why would the banks reverse the interest? Jain said: “Manipulation and harassment of the farmers by the banks are quite frequent and this has also led to farmer suicides. The interests were charged surreptitiously and it was seven times the amount. The subvention meant to be given to the KCC holders was incorrect in hundreds of accounts in the same SBI branch and the farmers had to pay thousands of extra rupees.”

His reports examined the actual picture of the tall claims of the Central government, claiming to bring electricity in the remotest villages in the country and making several districts as Open Defecation Free (ODF).

Highlighting the misery of the people of rural areas in Odisha, Kumar said: “While there is lot of boasting about the implementation of the schemes by the Central and the state government, the picture at the ground level in Odisha depicts a different scenario. Although Deogarh district of the state has been declared as ODF district under Swachch Bharat Abhiyan of the Central government, the toilets in the district remain unused due to water crisis. Apart from government tankers that provide water only for two months in a year, ponds continue to be the main source of water in Deogarh. The salinity in the ponds makes the water unusable, forcing the residents to run from pillar to post to barter water from their neighbourhood.”

Even in the case of preparedness against natural calamities for which Odisha government has often been applauded, the fact is that of more said than done, according to Kumar. “During the cyclone Fani, although the initiatives to create awareness among the people were good, the relief measures taken after the cyclone was over, were not sufficient, as a large number of people did not get food properly,” pointed out Kumar. “The state, with several districts still not connected to road or rail networks, coupled with poor rate of literacy, has to go a long way ahead before reaching a satisfactory level of rural upliftment,” felt the freelance journalist. Namrata Acharya, the winner of the environmental reporting, has written a series of reports, to highlight the financial compulsions that force the people to risk their lives while battling with the predators to earn a few rupees.

Taking about the agony of the natives of Sundarbans during an interview with The Statesman, Acharya said, “Although the ‘tiger widows’ have been written about several times, there are so many issues faced by the local people that there can be no end to reports on their problems. The situation there is so grave that it requires immediate intervention by the government. The authorities should take some steps to rehabilitate the neglected lot and offer them with some other occupations like cottage industry.”

Acharya also underlined that even as environmental reporting is being given attention, there are a number of issues like health problems and environmental challenges that need to be brought to the fore, by the journalists.