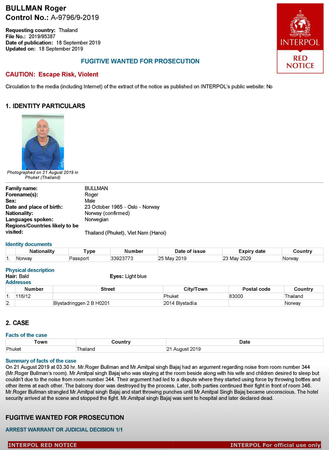 By Kumar Krishnan
THE NATION

Following a request from Thai police, Interpol has issued a Red Notice for fugitive Norwegian Roger Bullman who faces prosecution for the alleged killing of British national Amitpal Singh Bajaj.

The Phuket Provincial Court issued an arrest warrant for the 54-year-old Bullman, who was charged with manslaughter, after he jumped bail. He faces an additional charge of trespassing to cause harm at night.

The fatal incident took place in a hotel on Karon Beach, in Phuket province, where Bajaj, 34, was staying to mark his 10th wedding anniversary with his wife, a Singaporean national, and their child.

Initial police reports said the two got into a violent altercation at the Centara Grand Resort, where they were staying in adjacent rooms, over the Norwegian making too much noise late into the night.

However, in an interview with the UK’s MailOnline, Bajaj’s wife, Bandhna, rejected reports based on police questioning of the Norwegian that her husband had protested about Bullman singing loudly on the balcony. According to her account to the MailOnline, Bullman had been noisy and angry that night and reportedly broke down a wooden partition between the two balconies, charged into their room and started attacking her husband.

Police said that in the course of the fight, Bullman, a bodyguard from Oslo and also a martial arts expert, allegedly held Bajaj in a chokehold and continued to throw punches at him until Bajaj became unconscious. Bajaj was taken to a local hospital where he was declared dead.

Pol Captain Taecsin Deethong-on of Karon Police Station told The Nation on Thursday (September 19) that police had approached Interpol to issue the Red Notice two days ago. He said it was too early to determine whether Bullman had fled the country, adding that though police had heard reports of the suspect fleeing to Vietnam, a country he has reportedly travelled to in the past, these were yet to be confirmed.

Police have come under criticism from sources close to the victim’s family for releasing Bullman a few hours after the alleged crime on a bail guarantee of Bt200,000, despite the suspect being a flight risk.